We know there are no guarantees in tough economic times, that even a good performance review will result in a wage increase that keeps up with inflation. But, at least conducting these reviews communicates to employees that their companies are interested in the professional growth of their workforce and not ignoring the issue entirely.

In some conversations with colleagues, as some of us groan about the hassle of the performance review process, there are always comments along the lines that we should be happy that we get them. Some folks have said they hadn’t had any in years or none at all with their current companies.

While we do know from the Annual Salary Survey that nearly 1/3 of member companies do not have a Human Resources department, we had not yet asked how many folks get reviews.

Happily, this month’s poll reveals that 82% of participants have had a performance review within the past year. That is great, so, even those teams without a formal HR group are still setting aside a time to evaluate (and hopefully compensate) their workers! 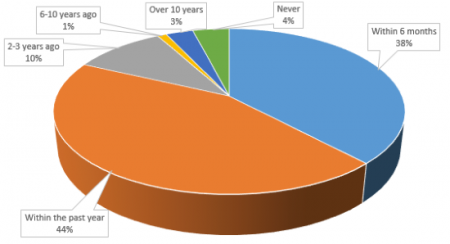 The company I was with the longest had annual reviews, although there was an established process whereby workers could be evaluated mid-year and rewarded for new skills, certifications or other milestones.

My last company performed reviews twice a year, and included cost of living increases as well as a performance component. They were known for their bonusing program, so the regular reviews were a way of helping the workers receive a portion of the company’s profits.

My current company is brand new, and we are all contributing to discussions with our head of HR, deciding what we liked best and what we did not find helpful during appraisal cycles with prior employers. It is interesting to take part in plans like these, when I have always been on the receiving end in huge companies so far removed from the policy makers. We think we are going with an annual cycle, but, are considering ways of capturing brag points, or coworker compliments, throughout the year, so they are not forgotten and disregarded over time.

If your company does not have a formal cycle, have you requested a review, even if informal feedback? When employees know their weak areas (or have been informed of a skills gap in their workforce), they can have clear goals to work toward. “I can get a raise if I learn how to…” and the employer does not have to rely on their gut or memory.

Please take a second to chime in on this month’s poll on AutoCAD customization (what is your favorite language or method?) and keep an eye out for the September, 2016 issue of AUGIWorld Magazine and the results of the 15th Annual AUGI Salary Survey!