What’s in a Name?

Keeping a team of Autodesk® Revit® users running in sync requires quite a bit of activity behind the scenes where BIM Managers may find themselves dealing with a cornucopia of often conflicting goals. There are licensing issues, training issues, standards issues, hardware issues, contract issues, templates, and not so oddly, jealousy issues.

Aside from all of that, BIM Managers must also craft a system of folder structures and file naming conventions that click into the culture of their firm allowing for consistency and productivity. Naming conventions may not stand out as the most important part of a BIM strategy, but when one considers the time taken every day by every user to find families, locate parameters, and navigate folders, the importance of a simple consistent convention becomes clear. Even those of us who have been doing the job for years can benefit from considering how we would do it if we were starting from scratch. I have tried to take that approach as I reflect on the examples and best practices presented in this article.

Why does folder structure matter? Folder structure is the highway all company files ride on. It can also be a convoluted mess of one-ways and dead-ends. If users cannot quickly find projects, families, and templates, there is friction in the system that will fight against productivity every day. If there are folders that users complain about navigating to or naming conventions that require users to scroll through long lists of similar names, it’s a sign that seconds are being added to that process every day. If files or folders get misplaced or people end up creating their own file structure, the structure is not working and should be reviewed.

Know that there may never be a more contemptuous battle than that of folder structure. We are creatures of habit and old habits die hard. The best most can hope for is making the entire company equally angry. My best advice is to fix the problem areas and leave as much as possible exactly the same. Keep in mind your top priority should be to facilitate finding files and data. I use a combination of file naming and folder structure for maximum impact. In concert, file structure and naming conventions can either complement or confuse each other. Where you may have a ton of files in a single folder, having a good naming convention is better than more subfolders. I stop at three folders deep. After three clicks down, most people are done sifting; it is too much clicking and not enough finding.

With so many parts of Revit requiring a naming convention like families, parameters, and line styles, it makes sense to apply a single convention to all so users experience a consistent approach and BIM Managers do not have to teach more than one convention. I fall back on the CSI Layer naming convention from my AutoCAD® days. This common format, Major, Minor, and Descriptor, builds predictability that reduces training time and speeds searches. There are many approaches, but the most important aspect is predictability. Having that predictability not only speeds searches for users, it can also click into the folder structure plan to reduce depth of folders and therefore clicks from users. To say it another way, having a naming convention that automatically sorts files by M, E, and P, means users won’t necessarily need to create a Mechanical, Electrical, and Plumbing folder where the sorted files are.

Order for order’s sake is fine, but remember to weight your changes against dollars. Consider if a click takes one second. You institute a plan reducing folder structure depth from six folders max depth to three. To be fair, not all folders were six folders deep, so say the average time saved per folder search is 1.5 seconds. Multiply that by the number of times a user may perform that search on an average day (in this example that number is 20). So a single person might save 30 seconds a day. My firm has 80 users performing these functions. Eighty users x 30 seconds equal 2,400 seconds, or 40 minutes. Using 2,080 hours in a normal work year, that equates to 83,200 minutes a year, or 1,387 hours a year. Multiply that by your billable rate, say $75 an hour, and you just saved the firm $104,025. Saving clicks makes money and wasting them will cost you. Do this exercise using your own numbers and the benefit of making changes should become very clear. 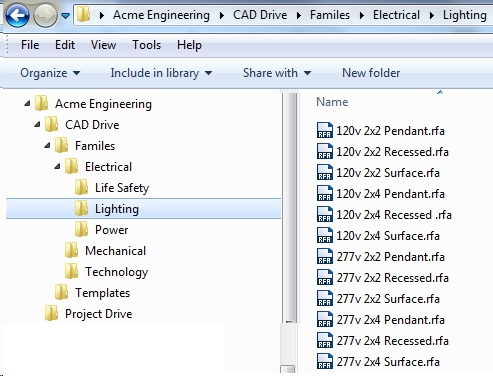 Names and structure should work together. When it comes to families, I like to use the file structure to separate M from the E and the Power from the Lighting. After that I use the naming convention to quickly find the light fixture family needed. A Lighting Fixture family might be named 277v 2x4 Surface. In the correct folder, all the “like” voltages are together, so users can scroll there first. Then they can get to the 2x4 fixtures and quickly identify the surface mount fixture over the pendant mount or recessed. This method can easily be applied to power, HVAC, piping, and other disciplines.

Naming parameters is tricky business. One, firms already have parameters whether we picked them or not. Two, everyone has to deal with the out-of-the-box parameters Autodesk provides, some of which you cannot remove. Three, the overriding reason for a BIM process requires a global standard for parameter naming—and there are one million to choose from. You probably have clients that are demanding multiple standards right now. That being said, maximizing a firm’s capability and productivity are critically tied to a well-managed parameter-naming convention.

I have not been to a firm that has not evolved their parameter naming convention. These evolutions result from the fact that we have all gotten better at pushing Revit’s functionality and have all thought of better ways to manage our data. Parameters, like hairdos, are personal, often driven by trends, and always seem to work better for the other guy.

To get to the best solution, go back to what parameters are really for. The basic function of parameters is to provide a placeholder identifier for the data in a model. That data should flow from elements to schedules. If data needs to be input by users into families, it helps for the parameter names to be recognizable by the newest users and organized for ease of entry.

A common first thought is to distinguish company parameters from all others by providing a prefix to all company parameters. ACME Engineering may begin all parameters names with AE. It is tempting to add an M, E, or P to sort parameters by the discipline with which they are associated, but it does not take long to find parameters that span disciplines. I prefer to keep parameters short and simple, such as AE.Voltage. Quantifying which parameters to make is easy. Visit the standard schedules and collect the headings. Consolidate these headings, recognizing that the same parameters may have differing header names in differing schedules. Electrically this is easier than mechanically. My firm has 11 standard electrical schedules and over 100 mechanical. A spreadsheet was required.

Firms will complicate line style naming, but I assert there is no real need. Keep it simple—AE1, AE2, AE3… covers all the bases, especially if the numbers refer to Revit line weights. Make it harder if you like by adding AE.Dashed, AE.Center, AE.Match, etc. I shy away from multiple weights for specialty lines.

Project names are hard to alter. If a firm has been in business for one year, changing project naming is nearly impossible. Think about it this way. Fahrenheit made sense for temperature and we are all accustomed to it. Celsius makes way more sense, but change is hard. Take a slow but steady approach to altering project naming if the perceived benefit is worth the effort of a cultural change.

What are important elements to include in project names? It depends on business culture and clients. I have had clients ask that MEP be added to our file names so the other consultants can figure out which model has the MEP. It made a ton of sense so we made it standard. We also found that adding a Revit version number to the file name saved us some trouble early on before all the neat add-ins that allow you to back out of an accidental upgrade. We still continue to end file names with _v17 or something similar to indicate the Revit version. The team has found it too valuable to not know what version a project is without opening it. There is usually a project number involved in the project name. The project number ties accounting to production and helps the whole firm speak the same language. Some firms include a couple of digits in that number for the year the projects started. This is a massive help for sorting through projects in a single folder. Some firms like to categorize by the client served or client type. The end game is to decide how to slice the data in a way that is useful to those who must navigate the data.

Once people start using view templates, they tend to create a lot, making a solid naming convention very important. My advice for MEP users is to start with a discipline and end with the use—i.e., E-Lighting or M-HVAC. View templates get sorted alphabetically so this makes it easy for your folks to get to what they need. You may also need a view template to make architectural backgrounds consistent—i.e., A-Background or A-Arch. As I indicated above, it is tempting to create many view templates for every issue. My advice is to limit your project template to less than 10 view templates and leave the specialty view templates elsewhere to be loaded on demand.

You may be weighting the effort of tweaking your Revit naming conventions by the benefit these changes may provide and saying “not going there.” You might be right, but consider the calculation at the beginning of this article where saving 1.5 seconds for an operation equated to over $100,000 in a year’s time. Every hesitation or misdirection your users have affects your firm’s bottom line.

To make the best changes you must take your own time and the time of others up front. Calculate that upfront investment into your thinking. There will also be a transition period where users have to adjust to changes and reverse muscle memory. Productivity will take a hit for a period of time. This is why I stress keeping things as simple and as consistent as possible. The easier things are for users to figure out and remember, the more effective the firm will be and the faster it will happen, making the change worth the effort.