The IoT in AEC

The Internet of Things, aka IoT... The name tends to conjure up images of all our devices connected and talking to each other, eventually ushering in an era where our bed tells the coffee machine we’re awake and to start percolating, the shower tells the washer not to run so we don’t get hit with cold water, and our cars talk to one another to make the commute simpler and automated.

While that’s all well and good, for many of us there’s the question of how it can be used to impact our designs, work, and environment. The truth is that IoT-connected devices are already being used in many ways in AECO. And a few may be beyond the few examples we initially think of. 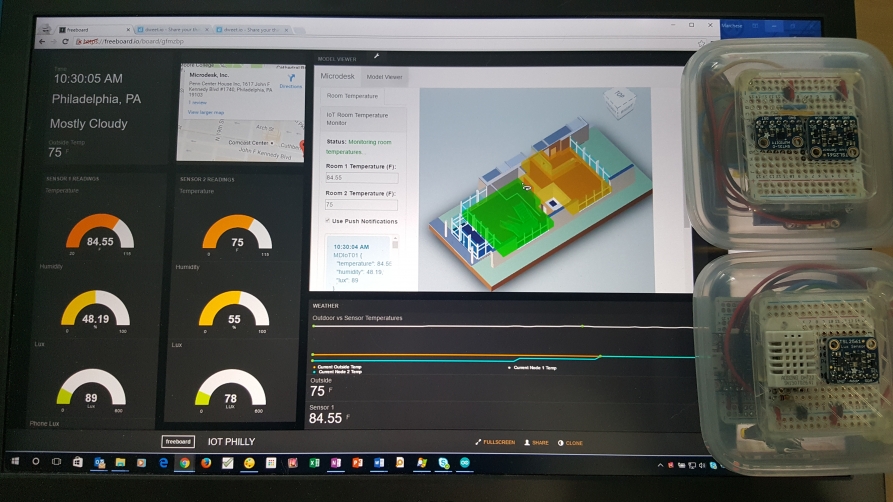 So first things first, what is the IoT? Essentially it’s what you get when you network or connect sensor-laden devices, and using their connectivity and data, understand situations and make decisions that you wouldn’t have been able to do as efficiently before—and in my mind that’s one of the things that defines IoT. Getting all that data is great, but if it’s not used, or if it’s not beneficial, then it’s just cool tech and not fulfilling its promise.

It’s that powerful application of ‘if this, then that” thinking that many of us apply to our apps or devices already. A fun example of this is that many of us at this point have a step counter such as Fitbit. Its sensors track our steps and help us make better decisions for our health (if I walk 100 more steps then I can have those Doritos!). This is in some ways similar to how a building’s HVAC systems use their sensors to track their efficiency and maintenance.

It’s also those environmental systems that many of us come to think of when we look for examples of IoT in AEC, and it makes sense. Many of the models that we make these days are built to high levels of detail for knowledgeable owners aspiring to use that BIM data for more than construction. Some are taking a model’s properties and equipment and syncing them with facility or building management systems automation. Those systems are already well developed and with sensors getting cheaper it’s easier than ever to track a building’s ecosystem. An example of that is a building with those sensors installed that are reading temperature and pressure from its mechanical equipment and specific locations on the system. As those readings start to move away from their typical operating levels they reach a point designated for inspection.

Where things are going, though, is rather than just lighting up a warning light on a console, services are able to generate a service order, display maintenance information from the building database, and show the location and parts in question in 3D on an augmented reality display to the maintenance personnel to streamline the repair and replacement process.

While I’m quick to point to an MEP example for how the IoT can apply to AECO, there are many examples for our other disciplines.

For architectural usage, it can be as simple as gathering real location-based data to inform a design or specifying adaptable systems to ensure an efficient design for LEED credits. However, some of the more interesting examples I have seen are buildings that transform and adapt their skins based on their inhabitants’ needs and current environmental conditions.

The RMIT design school building by Sean Godsell Architects in Melbourne is one such example. This building is covered in more than 16,000 small circular glass plates, with specific areas grouped together. This allowed them to rotate based on the sun’s positions and interior conditions to help with shading, fresh air, and cooling.  The RMIT design is not the only building doing this either. In a similar and striking example, The Al Bahar Towers in Abu Dhabi utilizes sensors to better the building from an energy and occupancy comfort standpoint. This building has an exterior that is reactive to the sun and can dynamically adjust through the day and into the night to help manage sunlight and heat gain—all the while creating an exciting design.

Moving to our Structural and Infrastructure / Civil examples, we are seeing the promise of IoT being used to benefit and ensure people’s safety. A great example that is starting to be applied to many bridges and building structures in seismic zones is sensors to report on structural integrity. The reason is that in many cases there are just too few inspectors to ensure safety on the many structures that need it.

Take California for instance, where there are more than 24,000 automotive and 5,000 rail bridges that need to be inspected. Looking at just the rail bridges, these are typically done by teams of two inspectors that can do two bridges in a day and are in the field two days a week. At that rate it would take 50 years to handle all the inspections.

What is starting to happen is the use of connected sensors and devices, some of which are even powered by the vibrations in the road surface that can read the health and movements of the structures and send their findings to a home base. This in turn enables the inspectors to be more aware of the state of the infrastructure and allows inspectors to prioritize the structures that need maintenance and monitor others for changes. That kind of information delivery and response will make our commutes much safer and can hopefully avoid many of the accidents that have happened in the past due to unnoticed degradation.

What I’ve been seeing is that as our design tools have become more powerful, and we have become accustomed to parametric elements and rule-based design, designers are no longer just taking advantage of that in the design process. They are carrying that kind of thinking into the actual construction and design language of their work.

For those of us looking to get more acquainted with IoT, there’s no end of places to start. From basic maker components to tools such as Panoramic Power that tie into Autodesk’s Building Ops service, there’s no end of ways to learn more and try it out.

To see what others are doing, many companies have put up public facing portals to showcase the data collection. Autodesk’s Pier 9 creative workshop has a 3D model hosted online using their viewer tech and Forge API to display relevant information from several of their machines. It can be interesting to navigate the space and see the live feeds from the machines when they are in use. For some of my presentations on IoT I show a cloud-hosted Revit model changing its display live, based on some small sensors that I built.

Looking forward, there are many use cases where the connectivity, data, and analysis of IoT can help us solve problems and enhance our designs. From the early information gathering phase to the ownership and maintenance phase, the key aspects are to look at what the IoT process is. Just like Building Information Management (BIM) is a workflow and process as opposed to just a 3D model or the result of any one software, IoT is more than a sensor or its data. It’s what happens with that data, how it’s used to automate or simplify a workflow and solve a problem. While we are still in the infancy of IoT, it is already apparent that it will help us deliver more evocative, efficient, and safer results in the future.

Peter Marchese has been working in AECO for more than 20 years. With 10 of those working in design and 11 now working as a consultant, he has been able to experience and work on projects of all types and sizes situated all over the world. In his current position as Senior Technology Evangelist at Microdesk, Peter specializes in assisting organizations with implementing BIM processes by working with them to create personalized workflows and processes along with plans and roadmaps to successfully achieve their goals. This includes working with and educating users on implementing new and upcoming technologies to enhance coordination, and differentiate skills and offerings from competitors.  This includes utilizing VR/ AR, cloud/ mobile tools, IoT, programmatic design and UAV’s to stay at the forefront of the industry. Peter is also a prolific speaker and writer, having presented at BIMForum, Autodesk University, and RTC, as well as many AIA and other events.