The History and Future of Revit MEP

Back in the 1900s Autodesk wasn’t publicly traded. The average time between releases of AutoCAD® was around 24 months. When perpetual licenses were the thing, firms would often choose not to upgrade for the sake of upgrading. AutoCAD was and is completely backwards compatible, so firms could remain on a known solid version like 14 (not 2014, just 14), while others could move on, exploring productivity enhancements such as Scroll to Zoom and the Sheet Set Manager. The point is, often it took a major enhancement to shake the money loose for an upgrade. It’s wasn’t just the cost of the software, but the time and effort to manage the upgrade and bring any customization forward.

Starting around the turn of the century, Autodesk moved to a subscription-based model, the idea of
“flavors of AutoCAD” were being pursued, and Revit was created. Each of these events play a major role in how we manage Autodesk software today.

In the perpetual licensing days, AutoCAD was delivered on CDs, DVDs, and flash drives, giving users the impression they owned the software. Autodesk contends that their software is licensed and cannot be resold. This was litigated in Vernor v. Autodesk, Inc. between 2008 and 2010. The favorable ruling toward Autodesk hinged on the wording of the right of first-sale doctrine that Congress could still change. With implications to other industries including movies, books, and music, Autodesk is hedging its ownership rights by shutting down perpetual licensing, moving to a subscription-based model, and not providing their products in shrink-wrapped boxes any more.

At eight years old, Autodesk was looking to diversify and add new revenue streams. AutoCAD can do anything. Users could easily customize it for their individual needs, but what if it came pre-customized at a premium?  Other industries were having success with spin-off products. If you are old enough, you may remember there being only one kind of Doritos, Mountain Dew, and Snickers. Nothing had the prefix of “Extreme,” “Lite,” or “Ultra.” Autodesk’s response was 2000i, Architectural Desktop, Autodesk Building Systems, AutoCAD Electrical, and many more.

While Autodesk was pushing an evolutionary approach expanding AutoCAD, a revolutionary upstart called Revit entered the market. Parametric-driven design software was not new, but Revit did bring a database approach where 2D, 3D, or schedule views all update as single database elements. Also new was the concept of the family editor where users could design and customize elements for their own use. It didn’t take long for Autodesk to purchase Revit and proclaim it their “flagship” for the architectural market.

What does all of this have to do with the new features of Autodesk® Revit® MEP 2018? In short, this history lesson helps explain why there aren’t many new MEP features and why there really haven’t been many for a while. It seems to me that Autodesk’s main focus has been on maintaining revenue over producing the very best product—i.e., the subscription model over a perpetual license. Autodesk gets a steady flow of income, and users got a yearly release cycle to justify the expense. Where in the past, a complete new release could take more than two years to produce, a yearly cycle necessitated less ambitious changes per release.

The advent of BIM meant that Revit Building really needed a Structural and MEP complement. Revit Structure came in 2005 and Mechanical and Electrical came in 2006. There were starts and stops in Revit MEP as it was being developed. Base Revit was made for architects. Trying to make that base work for engineers was not/is not a natural fit. In 2008 it was useable; by 2012 it seemed to peak. Revit was getting ready to go to a one-box solution in 2013 where all Revit flavors were sold in a single version.

Autodesk seems to be focused on having a single source BIM solution for the AEC community. In this context, MEP has only a small share of the importance of Autodesk’s new overall BIM solution. This was evident in the constant social media complaints of MEP users waiting for wish list items to be addressed. This continues to this day.

2018 brings the same near non-existing drip of improvements that MEP users have grown accustomed to. For mechanical design engineers, improvements for hydronic systems and the ability to customize Space types are the only real changes. There are fabrication improvements for slope control, the addition of dampers controls, and the ability to create PCF files. These mean nothing to design professionals and only highlights that fabrication has taken a front seat to design in Autodesk’s eyes. Mechanicals can take heart in that there is only one new electrical feature granting control over circuit length paths.

There are improvements in base Revit that will give MEP the feel that things are changing, but my impression remains that Revit MEP has had only minor upgrades for nearly 8 years.

Time to walk through the new features.

Closed loop hydronic networks can now be set to aggregate pressure drop and total flow of separate systems in an overall pipe system. A classification parameter has been added to mechanical equipment. Once set, it enables a Calculated Flow parameter and Calculated Pressure Drop parameter. Pipe now has a Critical Path yes/no parameter that is available in view filters for visualization. Users must define the critical path for these calculations. If needed, warning markers will identify where Revit is having trouble understanding the critical path. If users prefer the classic method, there is a Hydronic Networks tab in mechanical settings where users can disable this feature.

Hydronic systems can now have Analytical Pipe Connections. The connections can be added to mechanical equipment via a contextual tab and associated with nearby pipe with a default pressure drop of zero PSI. There is a new toggle in the View Control bar to turn the analytical connections on and off.

Space types and Building types can now be duplicated and renamed. This gives users the ability to create space types specifically for their needs and set to the required parameters for their individual needs. Tools for creating, duplicating, renaming, and deleting space and building types can be found in the Building/Space Type Settings dialog (Figure 1). Open it from the Manage tab under MEP settings. 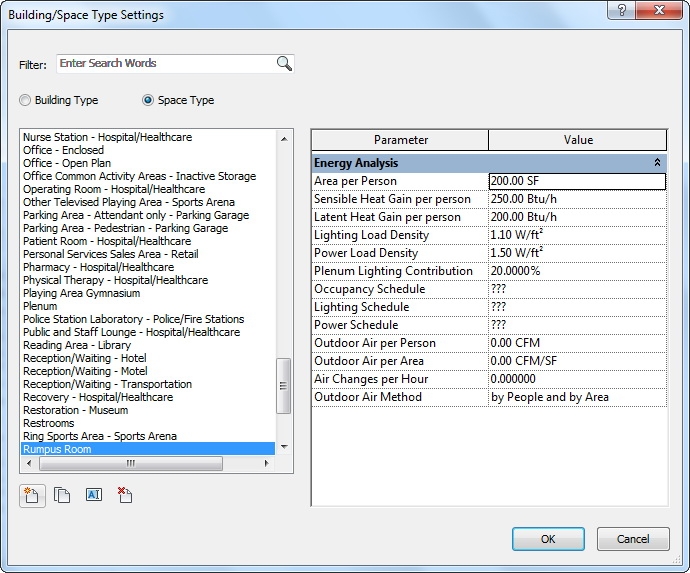 The length of an electrical circuit formerly was a read-only parameter. It is determined by the shortest vertical, horizontal, and depth path from beginning to end point. Users now have the ability to override the length parameter to address voltage drop and other calculations. The circuit depth offset can be set globally in the Electrical settings dialog (Figure 2). Individual offsets can be manually set per circuit path.

That is the entire MEP hit list for 2018. As mentioned earlier, there are updates to the base that are worthy of mention.

The first thing most will notice is what Autodesk refers to as Visual Enhancements. The ribbon has  fewer colors, lines, and gradients. It’s cleaner and easier to read. The Application menu has been reduced to a blue “R” that does nothing. Find those functions under an old friend in the form of the File tab

This is a departure from the original alignment with Microsoft and the adoption of the ribbon interface. This could be the beginnings of an interface more appropriate for hosted versions.

Visually, users should also notice a host of fixes including addressing a problem with blocked pop-up dialogs. Users should no longer have issues with the properties dialog going blank and being unusable. Similarly, a glitch with the options bar disappearing has been addressed. Scaling issues with the View Cube, Navigation bar, and the steering wheel has been corrected along with scaled annotations and schedule views in high DPI environments. In short, with DPI settings 200 and higher, all sorts of things would be unpredictably tiny. While making something work as intended may not feel like an upgrade, it is highly welcome in this case.

A Navisworks® underlay tool has been added. Find the Coordination Model tool on the Insert tab of the ribbon. NWD and NWC files can be linked and positioned into the Revit project for comparison and context (Figure 4).

The most useful of the base new features is the inclusion of a symbols fly-out on the text right-click menu while placing text. Now users can right-click to add a degree or delta symbol without memorizing character map key-ins. The character map for the current font can be invoked inside Revit by selecting “Other…” at the bottom of the Symbols fly-out menu (Figure 5). 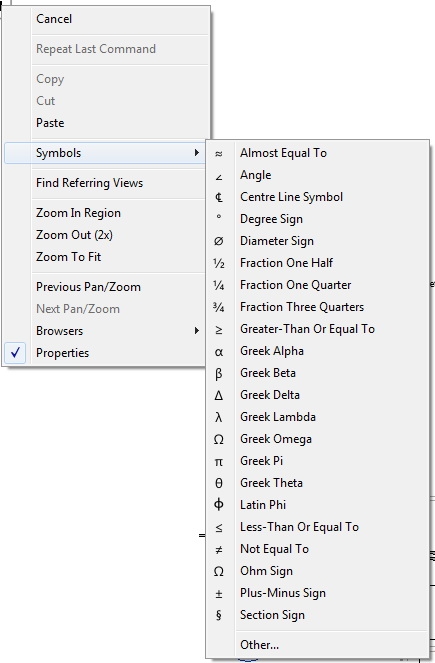 The 2018 version of Revit should be an easy jump for MEP users and administrators alike. We understand the drill by now and don’t have complicated changes to learn this time around. What remains is the feeling that the singular needs of mechanical and electrical users may never be addressed. Maybe Autodesk feels that the MEP portion of Revit is “good enough.” Maybe it will never be possible to make an architectural software truly fulfill the unique needs of multiple engineering disciplines. Perhaps both are true. No matter the reasons, we got what we got.

In the AutoCAD environment, it was much easier to customize workarounds and personalize solutions. This environment does offer customization, but many MEP users are stuck between using Revit as a modeling or a design software. Revit does not perform all the calculations we need, nor does it connect easily to the trusted software we currently use. Until Revit gives us finer control over the calculations we have, and access to the calculations we need (internal or external), we will remain stuck. We will continue to use Revit mostly because everyone else is using it, not because it works better than the alternatives.