The Future of Visualization

I first heard the term “interactive visualization” in the year 2000. I had started college and like any responsible student spent the money I had to buy the educational version of 3d Studio (the birth name of 3ds Max®).  I am not sure the term “buzz words” existed then, but if it had the list of words related to the software at the time they might have included “Silicon Graphics,” “Boolean,” “bezier-curve,” “8 MB of RAM,” “20 MB of hard disk space,” and “requires DOS 3.3,” which was considered “state of the art.”

After nearly two decades, software such as 3ds Max evolved and remains an influential force behind a huge section of the creative class. As the world advances, the leaders of the creative class consider future and potential uses for visualization, software including 3ds Max and technology with capabilities such as animation, simulation, and physics that can provide clear and accurate visualization of data in better and customizable ways.  In this article, I’ll talk about a few that these leaders are exploring today.

If you’re interested in UAV technology related to mesh and surface modeling I recommend spending a little time reviewing George Hatch’s webcast, “Site Capture Drones to Infraworks 360,” presented May 4, 2016 and currently available at https://youtu.be/aMyK2fNhQdI.  Basically, photogrammetry or scan equipment coordinates can be collected for any environment, stored, and then processed with various point cloud applications.  As software advances and high-end cameras become more available, point cloud and feature extraction will be virtually automated in real time using various UAV systems.

This exists today, but with very expensive equipment and a high technological capability. Currently engineers and developers are working to shrink the equipment, reduce cost, and simplify processing so anyone with a UAV can generate data on their own.  Acquisition without DEM or ground control points with resolutions accurate to within an inch or two, in every environment (harsh or otherwise), will be possible for everyone soon. UAVs will be equipped with sensors for navigation, wind, weather, environmental readings, clash detection, and more.  Cameras are advancing to capture longer ranges with higher resolutions and reduced flight times.

What does all this mean for 3ds Max and similar applications? If you’re not familiar with feature extraction, the idea is to generate accurate working meshes and 3D models from point clouds developed from 3D scans or photogrammetry that can be created with the use of UAV technology; this process is completed manually (for the most part) today.

Point clouds are essentially coordinate point files and can consist of millions of points.  If you’re not familiar with point clouds, an example is shown in Figure 1. 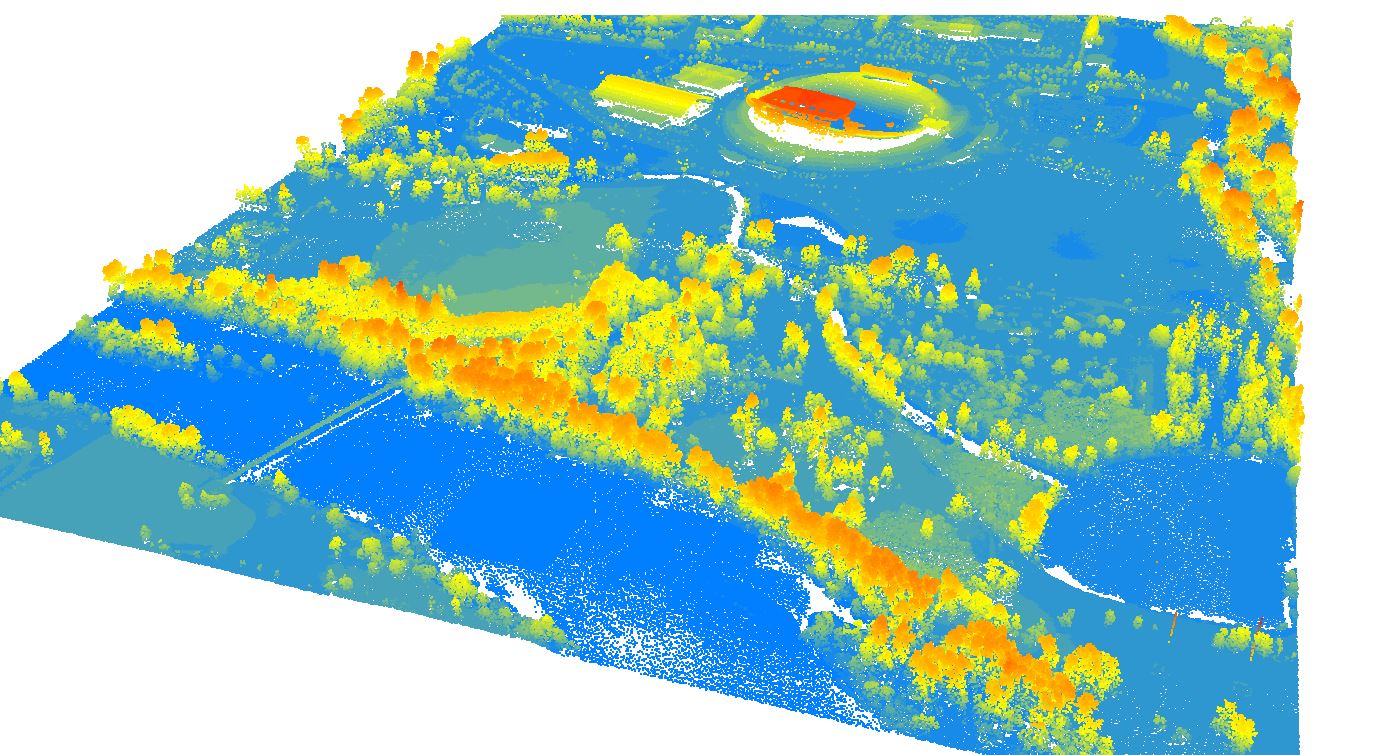 3ds Max supports RCP and RCS point cloud file formats generated from Autodesk’s software called Autodesk ReCap Pro.  By installing ReCap, 3ds Max users have the ability to work with ReCap point cloud file formats. Once introduced into your session, the point cloud object provides users with options to control visibility through a limiter based on a volume object and point density controls for viewport and rendering. From here, a user would identify various objects and begin to construct them, manually matching the point data available.

Clouds2Max is a plug-in brought to us by engineers Eugene Liscio and David Dustin. Clouds2Max was created to work with multiple point cloud file formats in 3ds Max.  It can be found online at http://www.clouds2max.com/. Rendering modes work with both Scanline and Mental Ray, and by providing box limiters and allowing the use of multiple point clouds in a single environment, it’s definitely something you might want to explore.  A screen shot of 3ds Max using the Clouds2Max plug-in is shown in Figure 2. 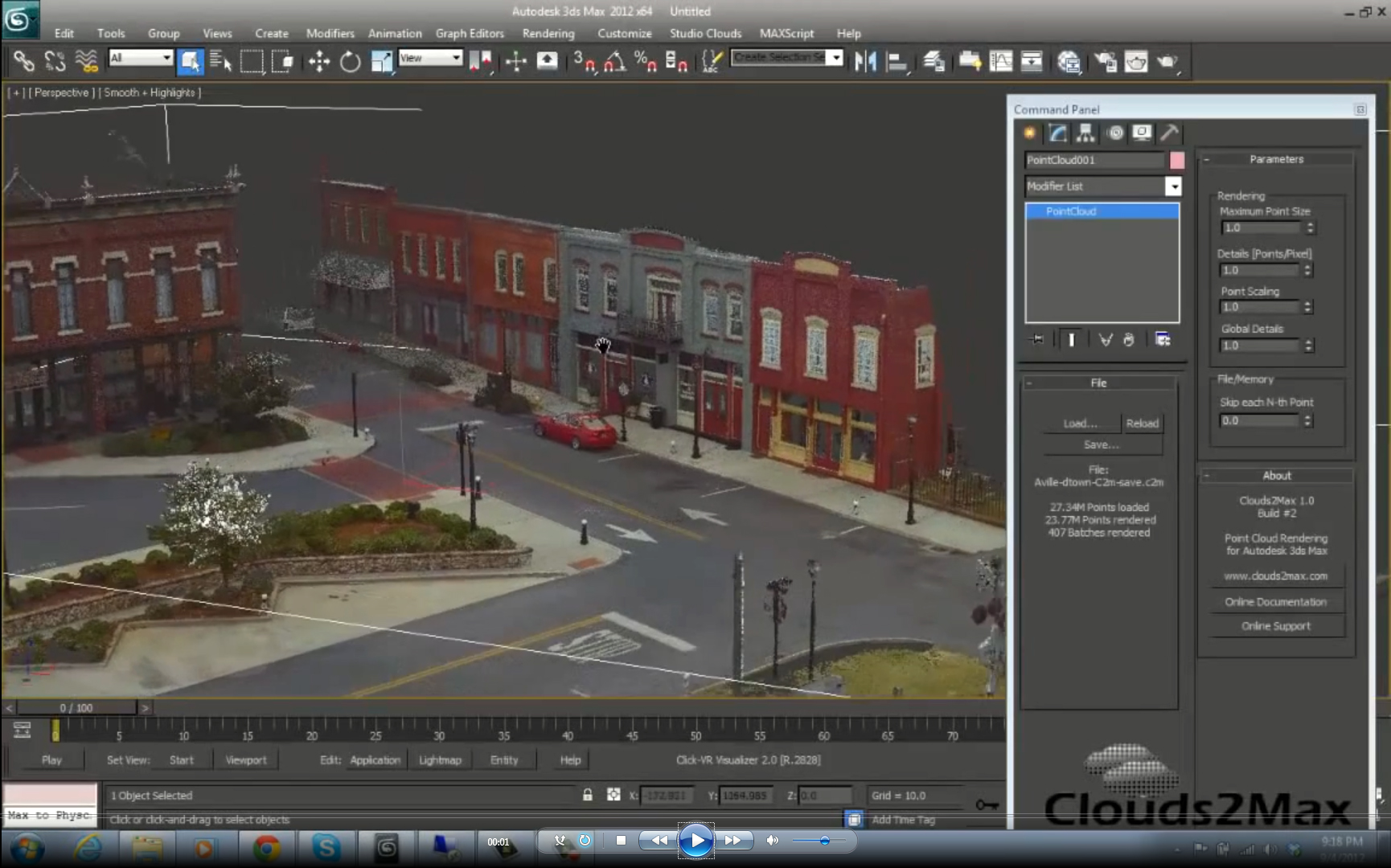 As you can see Clouds2Max generates point clouds maintaining the RGB colors to get a visual depiction of the environment.

As the processing systems continue to advance, extraction programs will automate construction of 3D models in real time, taking a model that might have taken several days and sometimes multiple teams to manually construct and turning it into a Friday afternoon with a hand-held UAV controlled by a smartphone and requiring no significant operational cost. There are large leaps to be made for this to happen, but teams across the world are working toward that now, which will provide a unique service to everyone in the modeling and visualization industry at a fairly low cost.

While Hollywood villains are busy knocking down skyscrapers and entire cities, UAVs will be there to be sure it doesn’t cost that much to make it look accurate and real.  Students will track live archeological digs with the ability to take real-time measurements perhaps hundreds of miles away. Biologists will track and model the movement of animals in their natural habitats, mapping them in 3D, perhaps from the comfort of a Jeep or office.

Scientists will use these systems to model and measure large-scale environmental concerns such as moving glaciers, changes in oceans, land masses, and fault lines in real time.  Infrastructure, tunnels, ruins, wells, and more will be accurately modeled with limited human error.  It might not be long before we see UAVs mapping the entire earth, generating it in real time in 3D, giving visualization teams the ability to download content to create the most accurate and realistic model for their scenes for back drops, presentations, engineering, design, development, and more.  Security services will use the technology to analyze entry and exit points and security concerns for constantly changing urban environments. Engineers will use the data to run 3D analyses of every kind and even tourist companies might use the service to price out particular views.

All aspects of society will continue to be influenced as we venture into a virtual world in perhaps a scale the world has not seen before. The introduction of the most realistic virtual reality equipment ever developed provides a unique opportunity for developers and modelers to provide virtual environments for anyone to explore.  High-resolution products can be provided to educators, students, the physically impaired, forensic teams, scientists, and more. Some services might include online guided virtual museum visits constructed based on user interests or requests, construction and part repair tutorials, training simulations for an unlimited amount of industries or simply for entertainment or teaching applications.

For the AEC industry, with cost reductions in equipment combined with the advances in UAV technology, 3D modeling, and virtual headsets, it might be just a matter of time before a developer’s site visit occurs from the comfort of his or her home on the other side of the world.

Currently, users need to continue to hone their skills and work with the software available today to accomplish the tasks mentioned.  By combining 3ds Max with the power of other applications, users are able to construct the most accurate, realistic, life-like simulations we’ve ever seen digitally produced.  A few applications that have been recently released work with 3ds Max in just this way.

The first I’ll mention is Autodesk Stingray, a 3D game engine and real-time rendering software utilizing the animation and modeling abilities of 3ds Max. With a live link between Stingray and 3ds Max, users can import, view, modify, and interact with 3D content in real time. See Figure 3 for an example project called Ghost Town, created by Fatshark AB.  Ghost Town represents a game-like environment, but if you work in architectural visualization I recommend reviewing the examples provided on Autodesk’s website.  Stingray will give Max users the ability to present their content like we might never have before. 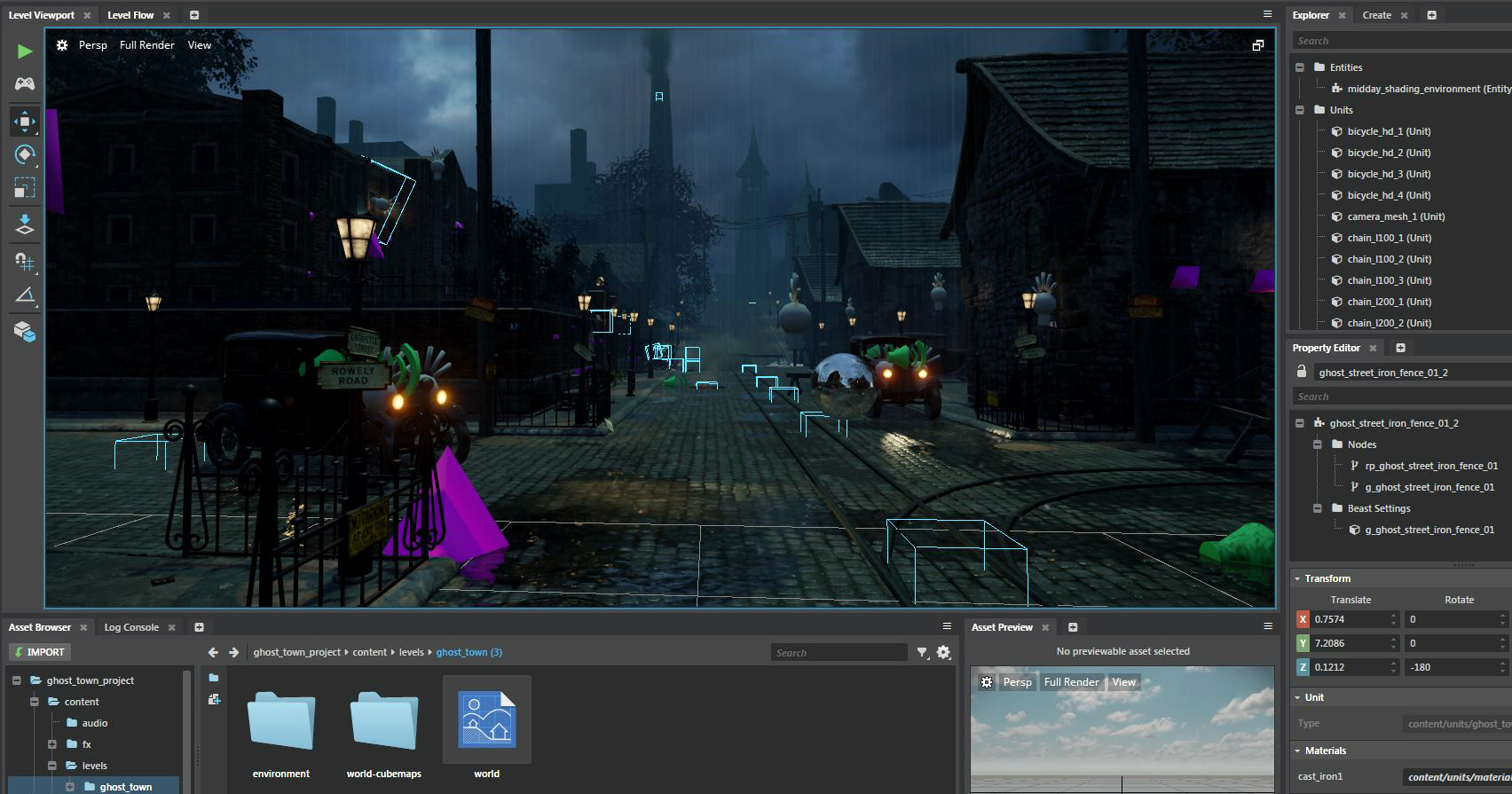 Second is Autodesk ReMake, software created to generate high-resolution meshes from photos or scans.  Generating meshes for visualization, online collaboration, asset development, and more is completed with a click of a few buttons. See Figure 4 for an example of a ReMake model.

Hopefully the information provided will help you consider where the future is going with regard to the visualization and modeling industry. If you plan to move forward in these areas you can use this information to refine your 3ds Max skills accordingly.

Brian Chapman is an Autodesk Authorized Developer, creator of Pro-Cad.Net and a Senior Designer for Slater Hanifan Group, a civil engineering and planning firm dedicated to superior client service. Brian can be reached at procadman@pro-cad.net.