Surveys Article: Who deploys your software?

It is the time of year when our community looks at tackling the task of software implementation and upgrades. So, we want to know, who pulls the trigger and rolls out the software in your company? 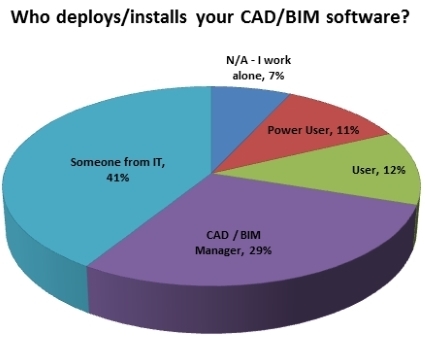 A small, but not insignificant, number of our community fly solo and take care of their own installations.

In my last position, I would’ve counted myself among the 11% of Power Users who installed software. Initially, only IT was allowed to roll out our CAD and BIM and viewing/plotting software applications, but, once they deemed me a Power User, I was allowed rights to install for myself and my team, which made the process much simpler.

12% of users install for themselves. A little under a third of companies have their CAD or BIM Managers doing their deployments.

The largest segment, at 41%, have their IT teams conduct application installations.

Problems with your installations? Check out the next issue of AUGIWorld magazine for great articles on Implementation, and swing into the CAD Manager’s forum to post questions.

Be sure to pop up to the AUGI site and take this month’s poll. Every spring, we ask how many of our members are looking for new jobs. As the recession fades and profits climb (but wages stay stagnant) we are seeing more folks taking a good, long look at the job market and what it might have to offer. Are you among them?