This month’s poll was a difficult one, I know. How can you determine exactly how much time you waste because someone didn’t communicate or didn’t communicate clearly? When the client asked for X and the PM told the design team Y and the builder put up Z?

This month’s issue of AUGIWorld is on Management. Typically, I think of managing timelines, managing files, managing our customizations and other resources. But, Corey Daun, who assists me with Surveys and Polls here at AUGI, suggested this question to get us to start a dialog or examine the causes of rework.

Think back on your work history, and I’m certain you’ll be able to come up with examples of poor communication causing you extra work. Perhaps it’s a Friday morning and you’ve been working on a drawing set due on Monday, when one of your coworkers comes in and sees what you’re doing and says ‘oh, that wasn’t supposed to be like that, we need it like this!’ and you spend the rest of the day, and perhaps part of the night making the changes, when you very well could have done it right the first time if only anyone had bothered to tell you. Maybe you go back to your coworker and point out that they hadn’t mentioned important details to you, and they say they could have sworn they’d mentioned it, or they had said it to someone else on the team and expected you would find out through them.

Hopefully these things don’t happen all the time, but, if they do, take a minute to examine what went wrong and try to piece together ways to prevent it next time.

Do you receive instructions individually or as a team? Maybe change that, so you can ask for specific details one on one or so everyone can hear the questions the others ask.

Do you receive instructions verbally or in writing? Maybe verbally, someone forgets to mention something or someone interrupts and it gets skipped? Maybe in writing, someone is typing on their phone from the field and doesn’t take the time to put in all the details or doesn’t realize in scrolling up and down that they’ve left something out.

Whenever you detect a pattern in the way oversights happen, you can try thinking of ways to address them. Wasted time isn’t just wasted money and hours stolen from your personal life, it is also a major source of frustration and stress, which will make the other problems seem larger in conjunction.

Questions or ideas on addressing communication issues? Pop into the CAD Management forum for a chat.

So, on to the poll. The question was, How many hours per month do you spend fixing errors that were a result of poor communication?

Now, as a single question poll, you can see where this might fall down… are the members that responded CAD/BIM Manager types who jump in to fix things for an entire team or a large company? Or individual workers fixing a minor volume of problems on smaller projects? 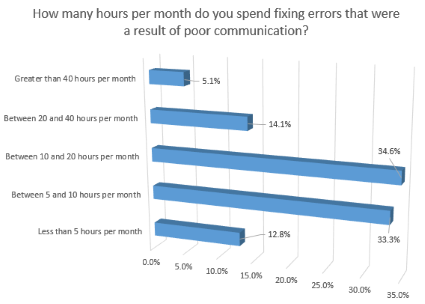 The bulk of the users who responded (68%) say they spend between 5 and 20 hours per month fixing errors that could have been avoided with better communication. That is a lot of hours.

Let us simplify this as much as possible to try to put a number of wasted labor dollars per year. The overall average wasted hours per month is over 17, which could be 211 hours per year.

If your leadership does not want to hear about poor communication, instead, put together some numbers based on real experiences in your office. ‘In the last six months, we have wasted $$$ because design intent or project-specific details are not being delivered to the team in a timely manner. If we change handover, we can save this.’

Next month’s issue of AUGIWorld Magazine focuses on Collaboration. I am taking a slight departure from my usual habit of following their Editorial Calendar with this column, though. We will instead be polling on whether you sign up for AUGI (and similar professional sites) with your personal email address or your company email address.

(Don’t remember because you have got your login details to the site saved to your browser, or because you seldom bother to log in? Or, want to set up a secondary email address to ensure continued access to your account? Click here: https://www.augi.com/account/email-password)