Surveys Article: To customize, or not to customize?

Shortly after joining AUGI as a young pup ~cough mumble~ years ago, I heard constant mutterings about automating and customizing software. Up to that point in my life, I thought software was something to be dealt with as it came, drudgery and all. My eyes were fully opened during my second attendance at Autodesk University when I took some CAD Management and programming classes. Suddenly, I wanted to jump on a saddled tiger and scream ‘I HAVE THE POWER!’

The next issue of AUGIWorld magazine is themed around customization. I thought that the obvious thing to poll our membership on this month is whether or not your company is wise is enough to dedicate resources to programming and customizing your software?

I was not sure what to expect with the results of this poll. As when Robert Green conducted surveys of CAD Managers, it was always apparent that valuable skills found in CAD Managers were not always accorded the time they deserved, with those who provided the services still being expected to produce and be billable like everyone else, no matter how much time they might save the company in the long run. Overhead is a nasty word in most industries.

Am I, as a System Administrator who spends the vast majority of her time customizing software and automating repeated tasks for my users, somewhat biased on this topic? Perhaps. You could say biased, or you could say enlightened, I don’t judge.

Now, on to the results: 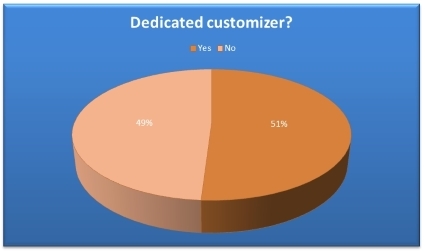 We seem to be split pretty evenly on the issue, with 51% having someone in-house dedicated to this ideal. A question like this might be a fun hot topic for next year’s salary survey, so we could get a glimpse at any differences in the industry or company size that values in-house customization, versus those who do not.

If you are interested in more information about programming within Autodesk products, I suggest that you visit the busiest section of your AUGI forums, the Programming area or the Revit-specific API forum.

And, of course, keep an eye out for the October issue of AUGIWorld Magazine, where your dedicated content managers will bring a focus on customizing and automating to this month’s columns.