Retopologizing a Mesh in 3ds Max 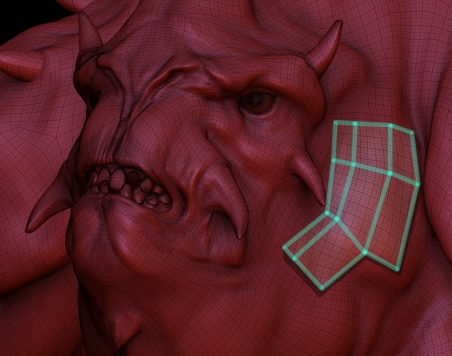 Figure 1: The concept of Retopology

Digital sculpting is like modeling with super powers. With tablets and technology, the ability to create extremely high-poly models is literally at the tips of our fingers. Millions of polygons are pinched, pushed, and pulled as if we are sculpting the creation from clay in our own hands. While it's fun to play supreme being where we can create anything in our imagination, we can't deny the limited use for a model having eleven million polygons like that shown in Figure 1.

Using Autodesk® Mudbox®, 3ds Max®, or other software, artists sculpt detailed objects from a digital piece of clay. By quickly creating complex models with the ability to alter them on the fly, users can explore ideas very quickly during the initial stage of creation. This allows artists to gain control over a part of production that has a strategic impact on a project’s budget during its initial phase. Once the initial model is complete though, it needs to be converted to something that can be used for practical applications.  Part of this process is called retopologizing.

Retopologizing a model is essentially reconstructing an object from scratch. It allows artists to unwrap a mesh and properly apply textures and materials so they do not appear distorted or stretched in the final render. It reduces stress on computer processors and graphic cards, allowing the computer to more quickly calculate lighting, refractions, reflections, shadows and more based on the reduced number of polygons. For objects such as characters, it allows 3ds Max to display muscles and bone distortions more realistically, which can also be animated more efficiently. For game assets, it helps creators generate higher resolution models when close to the camera and one with less resolution for objects further away, which reduces stress on the system and allows flexibility to provide more content.

3ds Max introduced a specific set of tools to simplify the retopology process. The process is like tracing something on paper, except in 3D. So let’s gets started with our tutorial.

If another software platform was used to construct the original model, the first step is to import the model into 3ds Max. Figure 2 displays a screen shot of our import options using the common OBJ format. Note the bottom of the dialog box, which allows us to load preset import settings based on common modeling applications available today.  This should serve as a reminder that while many applications export to common file formats (such as OBJ or FBX) there are subtle differences between the files themselves that may need to be accounted for during import.  Also, note that files do not always import at the proper location and may need to be repositioned. 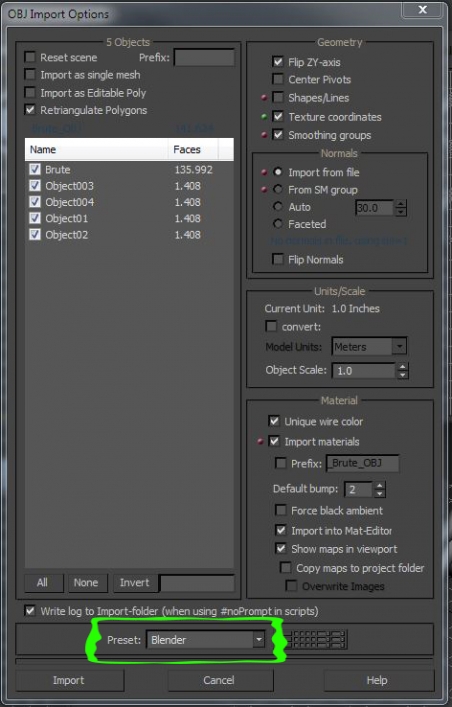 Next, select the imported mesh and convert it to an editable poly.  With our imported mesh selected, we'll want to direct our attention to the "Freeform" tab.  There we need to select the option to draw on the surface displayed, as shown in Figure 3.

When prompted, we'll need to select the surface of the object. Alternately, we could choose the Draw on: Selection option.  Please note that the selection is not stored in memory, and if you were to restart a session of 3ds Max you'll need to complete the operation again.  At this point we can start to trace our object in 3D with or without an offset shown in Figure 4.

This option controls the distance our new mesh will be constructed from the surface we selected. The primary benefit of using an offset is that the newly created mesh won’t get lost in minor deviations on our selected high-poly surface. Once that's complete, we need to select the "PolyDraw" drop down menu and choose "New Object" shown in Figure 5 to start our new mesh.

There are a few options to start constructing a new mesh at this point in the process. Many prefer to start with the "Strip" selection shown in Figure 6 by selecting the option then clicking and dragging across the surface we wish to trace. 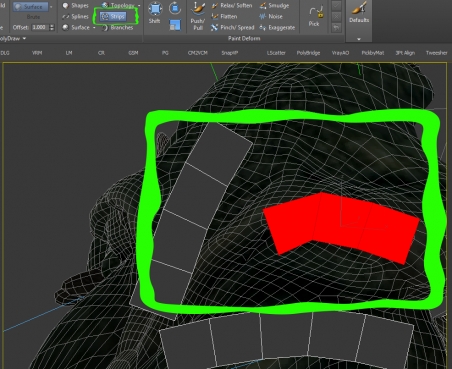 Figure 6: Tracing with the Strip option

Personally I prefer to start with the "Step Build" option. Step Build gives us the ability to click important points on our surface and close them, creating a face and giving us precise control over the construction of each face as shown in Figure 7. 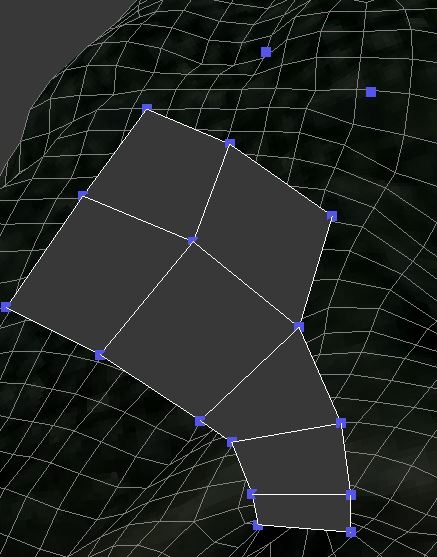 Step building is a simple process. Just select four points on the object representing four corners of a face, then hold shift and drag diagonally across them to create the face. If we hold the mouse over the Step Build option, we see the various methods to assist us with creating our new mesh as shown in Figure 8. 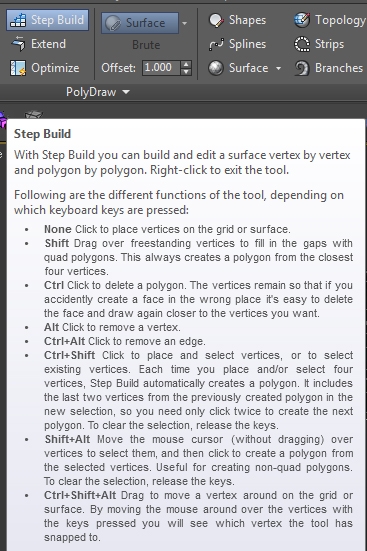 Other tools such as splines and topology are available, which allow the construction of lines that simply form faces of a mesh when they overlap. In the end, the retopologizing is basically taking a very complex object and converting it to an object that can maintain a decent resolution but can be easily textured and animated like that shown in Figure 9. 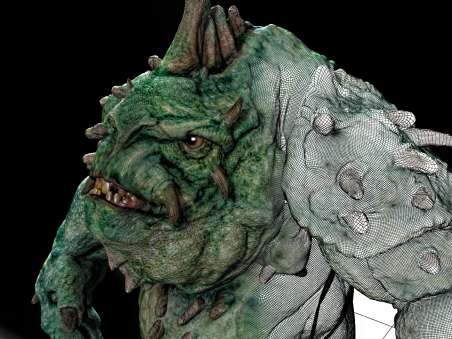