Making a Game of Model Navigation

For people unfamiliar with Navisworks, model navigation can be burdensome because it requires unintuitive combinations of keyboard and mouse clicks.

While visiting C.W. Driver, a southern California contractor, we noticed that one of the items they were researching was how to navigate BIM models more effectively for non-BIM users.  They had started this research, but became busy with day-to-day tasks and so we asked, and received permission, to continue the research they started.

Xpadder is a program that assigns keystrokes and macros to an Xbox 360 controller. With the push of a button or by moving a control stick, the Xbox controller sends a command or series of commands to the computer mimicking the keyboard and mouse-click combinations. Xpadder has created easier navigation in Navisworks, which can require several keystrokes and macros to change navigation controls and movement.

Xpadder was created by a person named Jonathan. There isn’t much information available about Jonathan other than that the program he created was intended for any Windows-driven software and for video games requiring keystrokes or macros. Xpadder was essentially created to improve accessibility for gaming. The software costs $10 to download.

The two options for the Xbox controller are wired or wireless.  If you prefer the wireless controller, an Xbox 360 Wireless Receiver is also required. We bought ours at newegg.com.  Do not plug in the hardware until after the software is installed. The following steps for software setup are sequential.

Once the above software is installed, plug either the Xbox controller or the Xbox 360 Wireless Receiver into the computer.

Push and hold the sync button on the Xbox 360 controller simultaneously with the Xbox Wireless Receiver.

Hold these buttons until they sync. (Xpadder will quit searching and blank buttons in Xpadder will appear when it is fully synced.)

Load “Controller Layout for Navisworks.” If you would like a copy of our layout, download it from the link below: http://cmfac.groups.et.byu.net/miller/BIM/Augi%20Articles/index.php

If Xpadder is not syncing, below are troubleshooting steps that worked for us in Windows 7.

If, when the Xbox controller or Xbox 360 Wireless Receiver is plugged in the message on the Taskbar says driver not found, you may need to locate the driver manually and install it.  To do this, press the Start button and select “Computer.”

Figure 1 illustrates how “keys” are picked from the keyboard or mouse and bound to the Xbox controller. 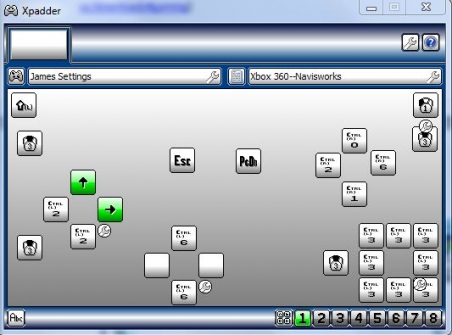 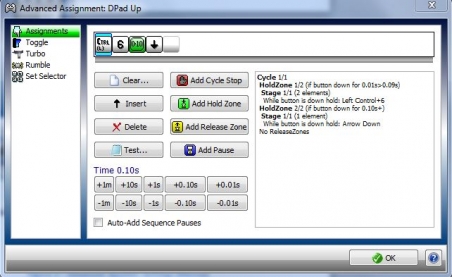 Figure 1 shows all “buttons” that can be mapped to the Xbox controller. In Figure 2 the “Xbox Controller” symbol indicates the current Xpadder profile loaded, which is the current saved settings that are loaded. The “New Controller” profile is currently loaded. Figure 2 displays the main menu and the keys that are bound to each button on the Xbox 360 controller. Each button illuminates when pressed. The wrench allows you to customize the layout and sensitivity of the buttons. All buttons are completely customizable.

The uploaded profile is what was found to be intuitive navigational controls. Through trial and error, many different combinations were tested with a variety of people. We observed that most people wanted to use the left control stick for moving forward and backward, the right control stick for head movement, and the control pad (up/down) to move vertically. Macros we incorporated with the control stick and control pad switch between walk mode and pan mode.

Figure 3 shows specific buttons that can be further customized with a macro. This is the menu for “Advanced Assignment,” which allows macros to be created for individual buttons.

If you’re looking to customize your own Xpadder settings or need to know the current macros available to you, beyonddesign.com has a list of all the keyboard shortcuts for Navisworks 2013.The link is: http://beyonddesign.typepad.com/posts/2012/05/keyboard-shortcuts-for-autodesk-navisworks.html

A general trend that the authors have observed is that many of the tasks that seem cumbersome in the BIM world the gaming world has already experienced. By going to the online gaming forums, we have found solutions to BIM issues.

Kevin R. Miller is the program chair for the Construction Management program at Brigham Young University and earned his Ph.D. from Arizona State University.  Prior to his academic career, he worked as an estimator for a large commercial construction firm.

James Christensen is currently a student in Construction Management at Brigham Young University and an undergraduate research assistant to Kevin. James describes himself as a Padawan in the Jedi BIM Arts.