Something wonderful happened around the year 2011. Autodesk introduced a new product called Autodesk Inventor® Publisher. That product brought a new way of exploding assemblies, as well as documenting these. It was fantastic, and gave everyone a nicer environment to deal with exploded view documentation—much nicer than the archaic Presentation environment in Inventor.

Unfortunately, Publisher was a bit of a resource hog, and while rumors of its demise are still circulating, the product is still selling on the shelf; Autodesk, always guarded with its plans, is only willing to say that there is no definitive plan to stop it.

Additionally, true to Autodesk’s statement that Autodesk Inventor is being continued into the future as their go-to mechanical engineering CAD software, 2015 and 2016 releases have delivered a very nice set of enhancements. One of these is the Presentation environment, the topic of this article. 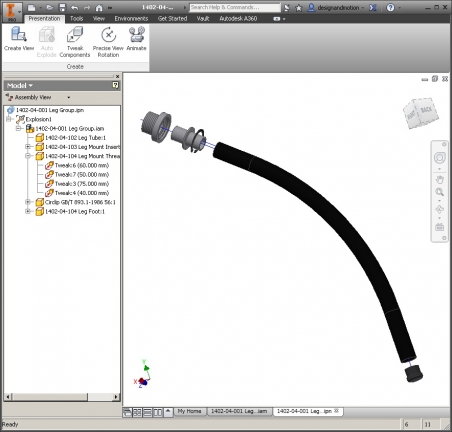 While these enhancements are not a replacement for Publisher, they do make creating exploded views much simpler and smoother. The following is a list of the changes and a few of my observations.

The terminology such as tweaks and trails are all the same, but the way you manipulate items is different. 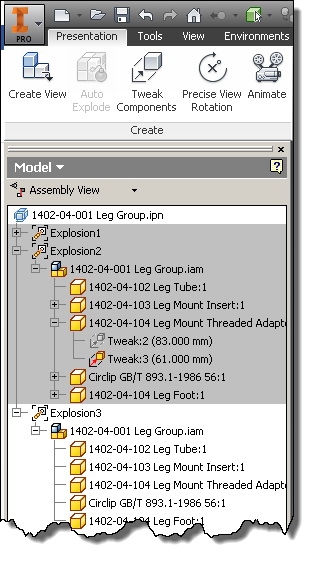 Selection Priority of Components, Parts, and Trails has been added to the Quick Access Toolbar.

Users can create numerous explosions in a single Presentation file using the Create View command on the ribbon. Each retains the position and trail settings independently.

Users can connect Assembly Design View Representations to individual explosions and make these associative (or not) if desired. So far it appears as though it only affects the visibility and appearance, but not the camera angle. 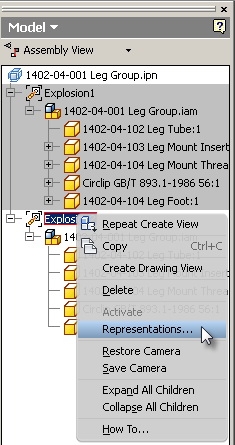 Note: the association with Assembly Design View Representations is one-way. Attempting to make alterations such as appearance will invoke a dialog asking you to disassociate the representation.

The Presentation browser can be viewed in one of three different modes: 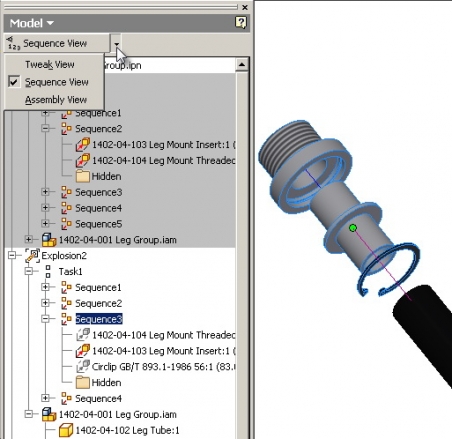 Each of these displays the assembly tree along with a list of the respective features, with components organized under these in expanding branches.

Auto-Explode has been enhanced and added to the ribbon and the Create View command.  The command remains inactive on the ribbon until an assembly header is selected.

The terminology such as tweaks and trails are all the same, but the way you manipulate items is different.

I have to say that I am quite impressed with the ease and intuitiveness of the command. The command starts as expected in noun or verb mode, meaning you can select a component(s) and start the Tweak command, or start the command and select the desired components. Once started, the mini-toolbar appears. 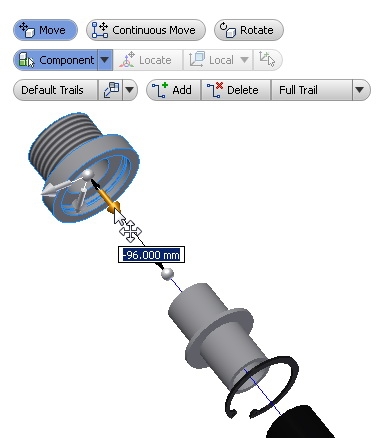 Move – Creates tweaks in a single-use scenario, clearing the selection set made during the last operation when Apply is picked.

Continuous Move – Functions the same as Move, but keeps the selection set active until components are removed or the command is ended.

Locate – Associates the Move Triad with a part, at a selected feature, and aligns to that part’s local coordinates by default.

Align Triad button – This allows users to align the Move triad to the axes of geometries within the part that the triad has been associated with.

Default Trails - The options under the pull-down are:

Add Trail – This creates an additional Trail during the current tweak operation.

The first thing that I like about tweaking parts is starting with the Triad placement. After selecting a part geometry to set the triad, that same component is automatically selected (default) to tweak, if one wasn’t already selected (you can always select something else if desired). The Triad takes on the part’s coordinate alignment, and away you go.

The next thing I really like is component selection on the fly. If a tweak is in progress, selecting other components will automatically snap them into the tweak relative to their respective locations prior to starting.

The effect is as if you had selected them all from the onset. This works really well with the single trail option. Select a single part, as well as the single trail option, and when you are satisfied with the placement, pick the remaining parts you wish to include. These will snap to the new location without creating individual trails for each. Then pick Apply before moving on.

When I tried to use the Auto-Explode feature, the command errored-out, noting that the joints and constraints that I used were inadequate. I adjusted one set of constraints from an automated Mate/Flush combination to the almighty Insert constraint. When I tried again, the process automated without a glitch. I think this is a logical solution to making something as awkward as Auto-Explode work in a predictable manner by limiting its behavior to coincide with the logical joint placement. Joints such as Mate/Flush are too arbitrary for Auto-Explode to do anything useful. 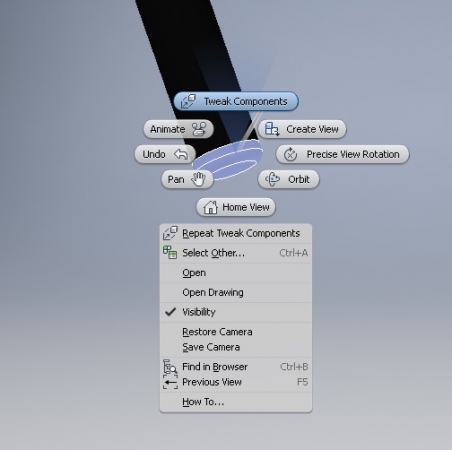 I must say that changes to the Presentation environment make it much more comfortable to use. The changes are far more intuitive and the mini-toolbar actually works well in this application.

Will it replace Publisher? No! (I wouldn’t want it to.)

Is there more room for improvement? Yes.

However, this is a great start to an overhaul that is long overdue.  I actually enjoyed using the Presentation environment for a change.