Thank you to all of the folks who chimed in on the homepage poll last month! AUGI members obviously love to learn!

Let’s take a look at how popular some of the different methods are among our members.

Formal classroom learning (high school, technical school, and college) is currently being used by nearly 22% of members, with another 6% in reseller training.

I’m sure that accessibility, convenience, and granularity are a reason why forums and blogs take the top spot for learning at over 46%. About a quarter of respondents are using e-learning courses and textbooks.

Of course, we round out with Local Users Groups (LUGs), mentors, and company-provided learning with 13-20%. About 11% of folks report that they’re not in training at the moment. 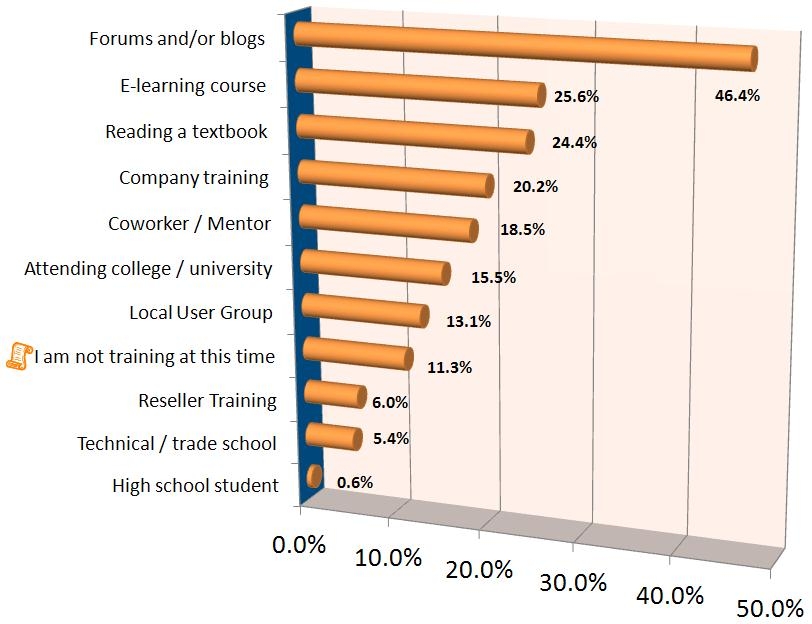 When you want to learn something new and are trying to determine which of the above methods might be most effective, you might want to take a quiz to determine your learning modality (or learning style). The four basic styles are visual, auditory, tactile, and kinesthetic (some lists omit tactile). Most of us can adapt to use all of them, but, if you have limited time, you might want to analyze which method would be most effective for you.

Polls and Surveys
I hope you’ve taken a moment to answer the March homepage poll and share your opinion on the changes you most value in a new software release.

Be sure to come back to AUGI.com in April, too, and update us on whether or not you’re currently searching for a job! In the May 2013 issue of HotNews, I’ll be comparing this year’s responses with the ones I received last year.

Please take a minute during March or April to swing by the current surveys page: http://www.augi.com/surveys/current-survey/current-survey and chime in.