From AutoCAD Expert to Revit Experience

I’ve enjoyed being very proficient with AutoCAD which I had learned since the late 1980s. Having used it for over three decades, I have become both an expert user and an adept customizer. I thought I would be able to continue to enjoy the AutoCAD ride and coast to the R word: “R”etirement.

The Other R Word

But in the last office where I had worked for over twenty years, I soon heard rumblings from upper management of a major change that would soon rock my AutoCAD world. Though most of the office clients have only demanded CAD, many of the competing offices began offering Revit as an extra bonus. Their slogan was loud and clear: “We do CAD but we Revit better.” This is when upper management made the decision that this office will match if not provide a better “R”evit service than the competition. There it was, the other R word that I did not want to hear.

This reminded me back in the days when CAD was first introduced into the design profession. The ongoing slogan back then was: “We do cutting edge CAD for you.” Now I also remember back then that for staff who didn’t do CAD, they were not only left behind but were also eventually let go. The writing was on the wall for this go around as well. Upper management was faced once again with these options on how to transition from AutoCAD to Revit:

1. Replace everyone who lacked Revit skills with new staff who already knows Revit

2. Invest in the current staff and spend the time and money training everyone on Revit

I’m glad upper management chose the investment option.  Staff were initially offered the option to get reimbursed for a 6-week (twice a week) class sessions outside the office. Furthermore, word was sent out to Revit experts requesting for quotes on costs to train/consult the current staff in the office bringing everyone up to speed on Revit. Surprisingly the best package that came back was from the office Autodesk reseller at the time: Microdesk. They were willing to come into the office for two three full day sessions providing everyone with computers to train the entire staff on Revit. Of course, I took advantage of this training by sitting in on both sessions which was a total of six full days loading my brain with Revit.

Though the training sessions were informative, none of the staff including yours truly, came out 100% Revit fluent. We would still require weekly trainings thereafter as we started implementing Revit on small projects. That process was truly painful to say the least. We also hired Microdesk to spend the time converting all our title blocks including standard details from AutoCAD to Revit so we can use Revit to put a complete set of construction documents together. Furthermore, I ended up spending time on my own going through video tutorials both on-line and off-line to learn more about how to use Revit effectively to put a building package together.

AutoCAD vs Revit in 2D

For me going Revit was a slow transitioning process. I would begin by drawing details in Revit’s Drafting View. 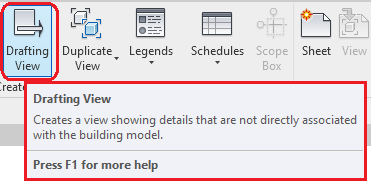 At first, I really didn’t see that much benefit from using Revit over AutoCAD. When just comparing the two programs which provide the same end result of a set of construction documents this alone really didn’t seem to make that much of a difference. Of course, AutoCAD truly is a superior two dimensional (2D) drafting package.  One can of course use Revit to just do 2D. Using Revit’s Drafting View, in addition to drawing details, you can also draw an entire floor plan, elevation and section there as well.  But using Revit like this would cause you to miss out on the vast amount of information that you can glean from really using Revit. 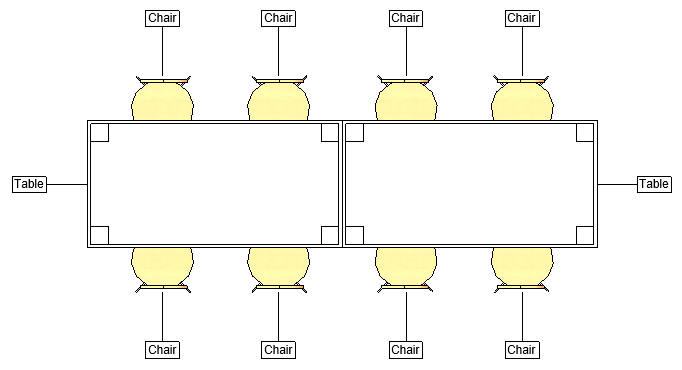 Take for example this plan view showing rectangles called out as Tables and the smaller geometric shapes surrounding it called out as Chairs. At face value there really isn’t much difference here whether this was drawn in AutoCAD vs Revit. But taking another look under the hood you’ll discover there’s really a lot more going on with these Table and Chair components placed inside Revit. 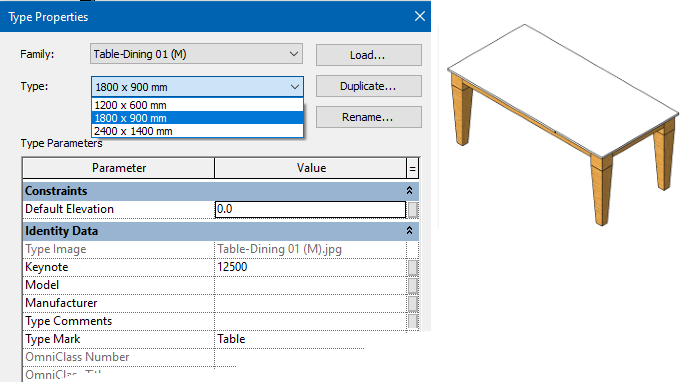 When you select the Table component and click on Edit Type, you will see a host of items or parameters not seen by just looking at the 2D geometry in the plan view.  The Table component actually has a number of the following parameters: (1) the Family name, (2) the Type showing various sizes, (3) the Keynote number linked to a CSI formatted construction notation list and (4) the Type Mark which tags this item as a Table.

A similar host of parameters can also be seen by reviewing the Type Properties of the Chair component. 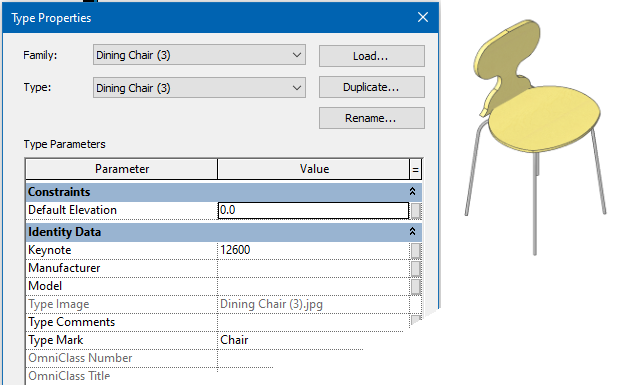 Many of us are aware of the benefits of investing the time to draw a three dimensional (3D) model in Revit.  But Revit offers another powerful feature: the ability to collect the parameters as inventory from these Table/Chair components. 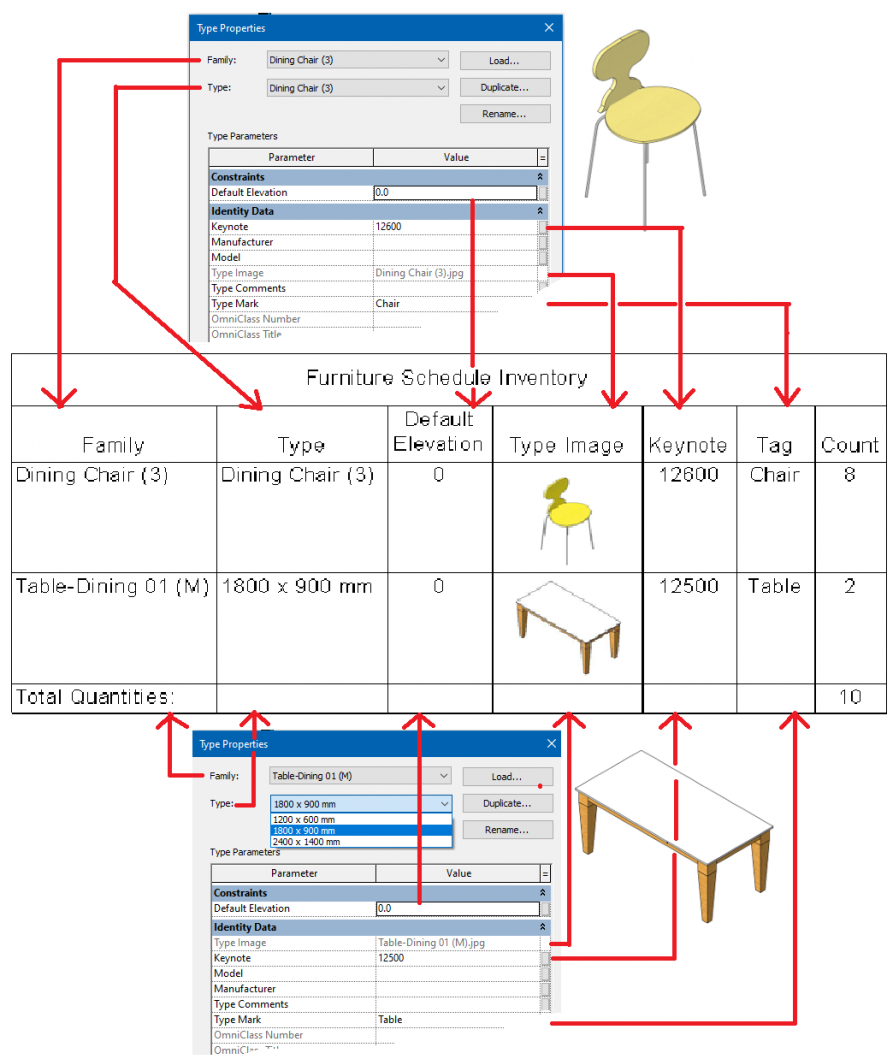 Using Revit’s Schedules command you can retrieve the Table and Chair component parameters and have them positioned into columns in an Inventory Schedule. Revit also offers the option to quantify the total number of items with a Count column.

I first learned of Revit’s powerful inventory feature when I had to plan for an office move. This presented the need to generate an inventory of all the non-fixed furniture and equipment components in the office.  Second, a separate inventory list of the furniture and equipment to be left behind would also be needed. Lastly, a final inventory list would show which of the components are kept and re-used in the new office location. This would be extremely difficult to do in AutoCAD alone.  But with Revit, I was able to use the Schedules command to generate various kinds of inventory schedules. For example, I was able to show a schedule of just the system furniture or desks the office currently used. I also used the same Schedules command to list all the bookshelves, wire racks and chairs that would be re-used in the new office. Since the schedules updated dynamically as changes occurred inside the Revit model, I was always able to see the latest and greatest information. For example, when there was a change in space planning, (i.e.: placing a set of conference table and chairs back or removing a set of bookshelves replacing them with system furnishings), I always had current sets of inventory lists that showed upper management exactly what was going to happen based on the changes.

Unfortunately, my Revit skills never matched with the expertise I had achieved in AutoCAD. But I’m still glad I had gone through the transition from being an expert at AutoCAD to also being a bit proficient with my experience at Revit.

Mr. Paul Li graduated in 1988 from the University of Southern California with a Bachelor of Architecture degree. He worked in the Architectural field for small to midsize global firms for over 33 years.  Throughout his tenure in Architecture he has mastered the use and customization of AutoCAD.  Using AutoLISP/Visual Lisp combined with Dialog Control Language (DCL) programming he has developed a number of Apps that enhance the effectiveness of AutoCAD in his profession.  All the Apps actually came out of meeting challenging needs that occurred while he worked in the various offices. He has made all the Apps available for free and can be downloaded from the Autodesk App Store. Though he recently retired from the Architectural profession, Paul continues to write articles depicting his past work experience. Some of these articles can be found in AUGIWorld Magazine where he shares his knowledge learned. Paul can be reached for comments or questions at PaulLi_apa@hotmail.com.