I have been a fan of 3D printing since I first became involved with the Mendel RepRap project in 2009. That project spurred a host of “affordable” desktop 3D printers, bringing the price down by democratizing the technology involved in Stereo-Lithography Apparatus (SLA) printed plastics.

That said, most of my company’s design studies involve metals and reducing component mass and size. 3D printing, or more correctly referred to as additive manufacturing, is a brilliant idea, but has been terribly unrealistic for serious aerospace metallic components … until recently. 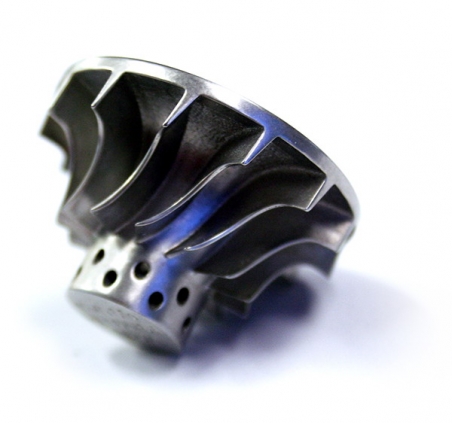 SLS involves a powder applied in a layer-by-layer fashion, which is then heated by a laser at precise locations. The powder that is not sintered by the laser is then removed and recycled, leaving the final solid structure where the laser bonded the particles together.

SLS does not melt the powder, but rather heats it to the point where the molecules bond at their contact points (makes the powder really angry). Early SLS products lacked durability. In many cases, parts possessed a non-contiguous density of material, their structure contained far too much residual stress, and a limit of basic materials in general often resulted in poor performance. I have witnessed parts break under loads that traditionally would only result in bending of a continuous solid steel. That kind of brittleness is unsuitable for any type of dynamic load. Add to that the cost of this type of manufacturing and you had a process few companies could embrace.

Electron Beam Melting has been in production since Arcam placed its first machine into operation in 2001. Arcam’s process is quite refined and will be referred to here as the definition. EBM is a process by which powdered metal is turned into complex solids within a vacuum, using electron beams to heat and guide a pool of molten metal. Multiple beams can be generated in order to control multiple pools simultaneously. The temperature of the entire powder bed build layer is maintained at an optimum temperature for the specific material. The process is stated to produce stress relieved structures that have better physical properties than their cast counterparts.

Production speeds are said to be faster than DMLS, but the material data sheets I have found seem to indicate that certain materials actually respond better to the DMLS process, with slightly better overall structural properties of strength and elasticity. This all depends on the application for which you are designing.

What I have witnessed and read leads me to believe that innovations in SLS and DMLS, including increased laser power and decreased layer thickness, have increased the strength of those production parts. Add to that refinements such as modified normalization processes and heat treatment make these parts exhibit robust physical characteristics. But the process is still slow. 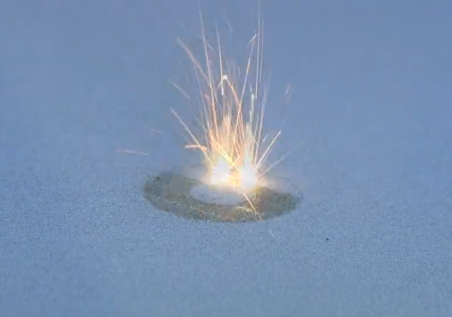 Note: SLS and DMLS are essentially the same processes. SLS is used with varying materials and generally anything that can be applied as a powder and bonded by the heat of a laser. DMLS, on the other hand, is restricted to metals.

Thanks to the research of Carl Deckard, metallic powder SLS has made a tremendous impact on complex metal structure production and has expanded the scope of the industry as a whole. Carl Deckard’s patent #US5597589 A (issued 28 January 1997) defines the SLS process noted above.

Deckard’s company, DTM (originally NOVA Automation), was sold after investment cycles and issues. Ultimately it ended up in the hands of 3D Systems, the world’s largest provider of additive manufacturing technologies.

The other contender in the ring is EOS GmbH - Electro Optical Systems, a German company founded by Dr. Hans Langer and Dr. Hans Steinbichler in 1989. 3D Systems held the U.S. patent on SLS at that time. In 1997, 3D Systems purchased the Stereos product line from EOS, and agreed to allow EOS to take over the global patent rights to the SLS technology. EOS would then focus its research solely on SLS processes. 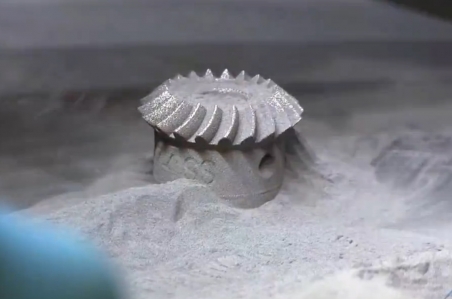 After the recent expiration of the SLS patent in January 2014, various DMLS start-ups and initiatives have begun. People are bringing new ideas together to reduce the size and expense of the DMLS process, bringing the technology to the forefront and making it accessible to everyone. The limiting factor there will be the need for inert environments, in some cases, and that power-hungry laser.

Early Adopters Know a Good Thing When They See it

We are not alone in the struggle to adopt this exciting and rapidly evolving process. General Electric and NASA are spending a lot of money and time innovating the additive metal processes and how these manufactured components can be used. 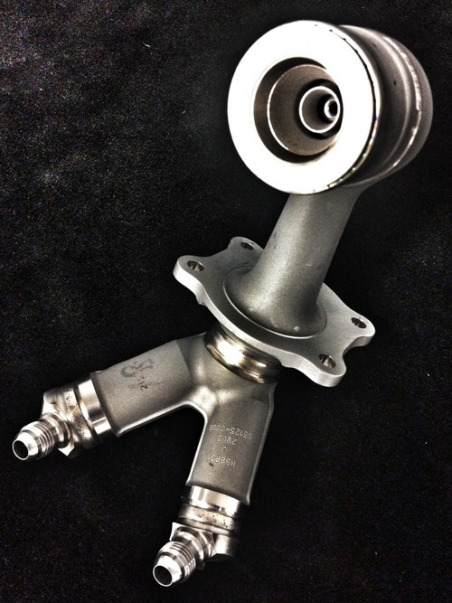 GE made a brilliant move by acquiring not only the DMLS and EBM technologies in 2012, but did so by purchasing Morris Technologies, one of the most experienced teams relating to these technologies and making the adoption successful.

"Our ability to develop state of the art manufacturing processes for emerging materials and complex design geometry is critical to our future,” said Colleen Athans, vice president and general manager of the Supply Chain Division at GE Aviation in a press release. 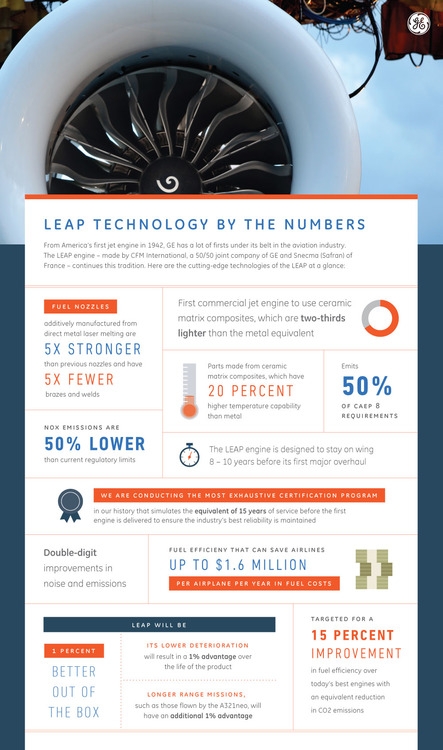 GE’s involvement and the expanding adoption of this technology is enabling material manufacturers to develop improved powdered metals for these purposes.

In the last five years I have witnessed the expansion of materials being offered by SLS machine vendors. Here’s the list that EOS currently offers:

These materials are robust and in some cases can take temperatures as high as 1200 °C. EOS thinner powder application has increased sintered densities to ~100 percent, which can be seen in the following properties.

The material specifications here are sourced from EOS and Solid Concepts, and were optimized for use in EOSINT M machines. These are only a partial selection, and are heavily summarized for this magazine format. In all cases, additional heat treatments and conditions apply to the DMLS material properties. (For additional information, see the sources at the end of this article.)

This cobalt, chrome, and molybdenum material is notably used in medical industry as well as a solution for high temperature requirements. This material offers the highest combined stress and temperature resistance in this lineup. Minimum wall thickness of 0.3mm, with a part accuracy of ±20-50 µm on small parts, and ±50-200 µm for large parts. 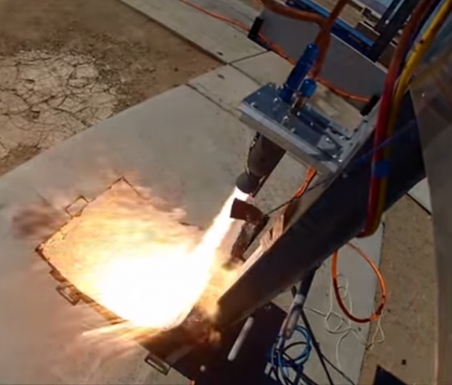 A nickel and chrome material exhibiting good durability and moderate to high temperature resistance. It takes well to precipitation hardening and heat treatment. The company notes its use in high temperature applications such as aerospace and land-based turbine engine components.

A robust stainless steel with wide usage in aerospace and medical, where good corrosion resistance and strength are required. This steel lends itself well to precipitation hardening and is ideal for small production runs and spare parts.

Modulus of elasticity: Not listed

This lightweight titanium and aluminum alloy is strong and resistant to corrosion.

Along with a lot of web-based research, I spoke with numerous service vendors about the machines being used in the industry.

EBM – Arcam is the provider (and to my knowledge, the originator) of the EBM technology. The firm holds multiple global patents on the process. http://www.arcam.com/

Solid Concepts’ experience and assistance with information relating to the DMLS materials and high temperature applications was invaluable and are referenced in this article. Kent Firestone, a former project manager at DTM, is the company’s vice president of Additive Manufacturing. 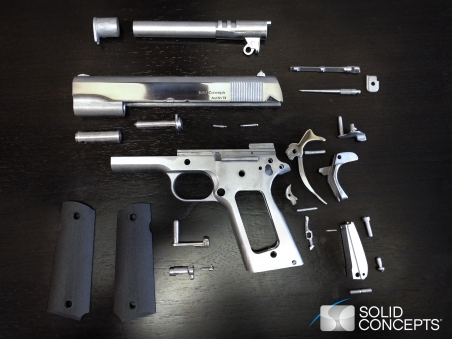 TurboCAM Aero in New Hampshire – DMLS and just about everything. http://www.turbocam.com/aerospace

Design & Motion is committed to the realization of our client’s designs and ideas. Studying new ways to reduce the size of parts and complexity of assemblies has been one of my passions and part of our success. Improvements in DMLS technology including part density and material types have opened up numerous doors and possibilities for us, and expanding the prospects for our client’s products. 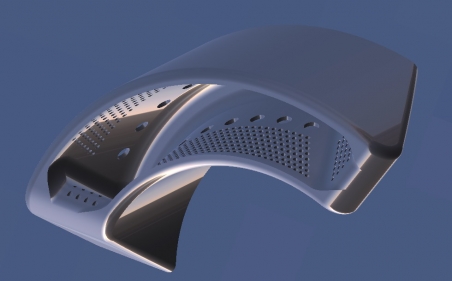 Our R&D turbine and combustor’s upper target temperature limit is ~1150 °C. DMLS and high temperature inconel and cobalt have been essential in making the design possible by providing a realistic safety margin as we work through the fluid dynamics involved in reducing the wall temperatures.

Insight from the DMLS providers that deal with aerospace development is helping our efforts. We can build components that withstand substantial thermal loads, and at the same time manufacture them far closer to ideal design parameters than was ever possible before as well as at reduced scales that are impossible to mill and turn. The other really cool and truly inspiring part of the equation is that so many components that needed to be manufactured separately and assembled can now be “printed” as a single unit. Cooling channels and fuel systems can be integrated in truly creative ways.

My discussions with Solid Concepts indicated that cost was tied to production speed, rather than mass. The cost of a 400 – 1000 Watt laser running adds up.

Also, Morris Technologies provided a comparison of DMLS and EBM machine models and the run-time cost relationships. The costs associated with older and newer generations of DMLS and EBM are different. Beware of which machines a company is using. If they are using older machines, your bill might look similar to having a taxi driver taking the long way to your destination.

Develop a good relationship with a DMLS provider experienced in developing applications for your industry. Consider their advice before completing your designs—it can help you avoid many pitfalls and save you a lot of heartache.

DMLS is only the beginning. Now that the patents have expired, the gloves are off and we should see some incredible advancements in cost reduction and new ways to build safer, lighter, and cheaper components without the waste we associated with manufacturing in the past.

More information and complete material specifications can be found at Design & Motion’s Engineering page at http://designandmotion.net/category/design-2/eng-notes/