Author: Sam Lucido is a CAD Services Manager with Haley and Aldrich, Inc. He has more than 25 years of experience involving design, user support, and customization. Sam is professionally certified in AutoCAD 2011-2014 and is a frequent speaker at Autodesk University. He uses his vast knowledge about AutoCAD to help provide support to engineering and design teams with monthly tip sheets and WebEx training. You can find Sam at CADProTips.com and he can also be reached at slucido@haleyaldrich.com.

When taking on a new civil design project I rely on a team of people to assist in getting the job done. This team does not work in the same office or even the same state. We need to collaborate online, via telephone, and over a network. So how do we collaboratively work on a design in AutoCAD® Civil 3D®?  We create data shortcuts for Civil 3D objects.  Justin can work on the grading plans, Laurie can work on the pipe network, and Qua can take care of the profiles. Finally, I will work with each member and pull the package together at the end publishing in a sheet set and linking the shortcuts together.  Data shortcuts are the key to our success.

What is a Data Shortcut?

A data shortcut is simply a link to a Civil 3D object between drawings through the use of an XML file. This enables users to work in other drawings and share Civil 3D objects. For example, I can publish a data shortcut for the surface and Justin can use that shortcut to complete the final grading plans for the design. So why not use an xref?  An xref is basically a link to another file where you can manipulate the properties of the xref within the current drawing. We do not want to manipulate the data—just use it as a reference. This means you can have separate drawings for surfaces and alignments and reference those together to complete the design.

Setting up the Working Folder

For this example we are working in a drawing with an existing surface and two alignments created. We need to set up the working folder for the data shortcuts to be created. From the Manage tab on the ribbon, click Set Working folder as shown in Figure 1 below. 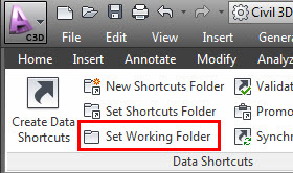 Now that we have the working folder created we want to create the data shortcut folder.  The working folder is the directory that will hold our project data. From the Manage tab, select the New Shortcuts Folder as shown in Figure 2 below.

This will only create a single folder under the working folder path. Make sure this is where your company wants to keep the data to help organize the information. After selecting then you will have to enter some information as shown below in Figure 3. 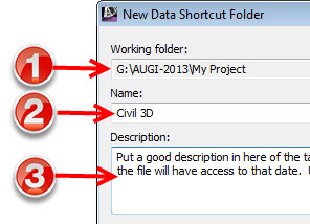 Next we are going to create the shortcuts within our existing drawing so they can be used across the design project. In Prospector right click on you data shortcut folder and select Create Data Shortcuts as shown in Figure 5. We are using an existing drawing which contains a surface (EG) and two alignments, cross sections A and B. 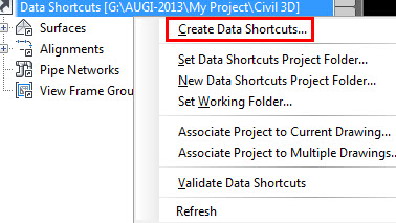 Remember, you will not be able to create a data shortcut if the drawing you are in does not contain any Civil 3D objects.  After selecting Create Data Shortcuts a dialog box will appear (Figure 6) and you will be prompted to check the Civil 3D objects you wish to use as data references.  You have now created data shortcuts for the surface and the alignments.  Civil 3D will place an XML file in the folder referencing each of those objects. 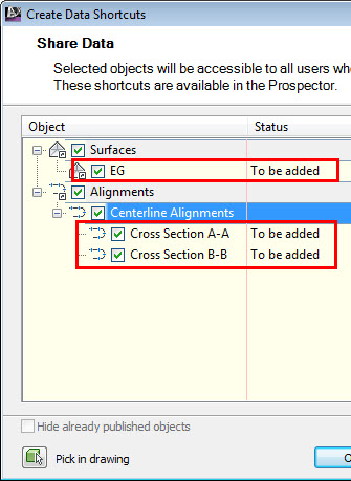 We are now going to our next drawing within the current project and reference in the surface.  In the prospector tab ensure that the data shortcuts points to the correct folder. Expand the selections as shown in Figure 7 and notice the objects we can reference. 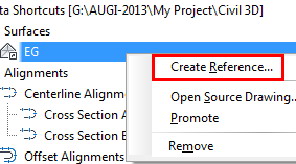 Right Click on EG and select Create Reference.  We are also going to reference in one or both of the alignments.

Notice under the Prospector tab your surface shows up but has a small arrow image indicating that the surface has been referenced into your drawing using a data shortcut. 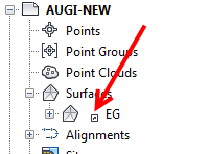 I can now have Justin complete the final grades and after we add the alignments I can have Qua and Laurie work on the profiles.

Projects that contain data shortcuts can be compiled and sent to clients, reviewers, and other members of the team using the Civil 3D eTransmit command. With eTransmit all of the referenced files including data shortcuts (XML files) will be packaged into the zip file, this will eliminate errors when others are reviewing your design.  It is important to include all files when sending off to outside sources for review.

Data Shortcuts in Civil 3D are a very important part of collaboration in project design teams. During my career I have realized that working together in a team is the key to a successful design; utilizing the skills of everyone involved to produce a high quality product at a lower cost.