BIM: Then and Now

A few years ago, when asked the question, “Are you designing in BIM?” most people would have answered, “Yes.” They had purchased a license or two of Autodesk® Revit®, they had created 3D content, and they had occasionally written some descriptive text in a parameter field. So we have a building “B,” we put some information in a field “I,” and it’s a model “M.” It must be BIM. 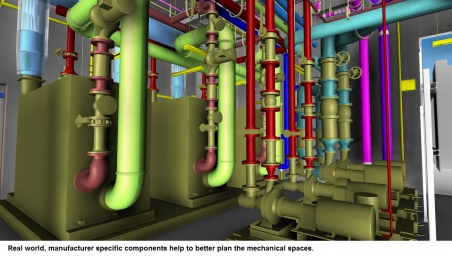 Once designs were complete and the projects moved into construction, the general contractors often tried to leverage the benefits of BIM to determine conflicts and constructability issues. Finding issues in the office is a lot less expensive than finding and fixing issues in the field. But were the contractors supposed to use the design model with the duct through the steel and the piping under the ceiling? What choice did the contractors have other than to start from scratch and use the diagrammatic contract drawings and develop their own constructible model? With the push for faster, cheaper, better buildings, contractors looked to construction modeling not only for conflict resolution, but also for the pre-fabrication benefit of constructing in the controlled environment of a shop versus out in the field.

While engineers and architects were creating design models in Revit, most contractors were still finding comfort in creating their models in AutoCAD®-based products.  The transfer of information was not only being prohibited by the quality of the models from design to construction, but also the platform or software in which the models were being created.  Unfortunately, to this day, many firms still go through the motions of creating contract documents with the model being a by-product rather than the goal. This greatly diminishes the potential value that BIM brings to the entire process.

As an enthusiastic building information modeler, I have always believed in the BIM process to result in an ever-evolving model that acquires value and purpose as it passes through each phase of the design and construction cycle. In a design/bid/build environment, the designer may not know what is actually going to be installed, but he can use a basis of design to represent real system components in the model to prove a concept rather than modeling diagrammatically. In a design build project, engineers and designers can obtain information from the contractors concerning the actual components going into the building and provide more realistic components in the model, adding real value to determining the constructability of the MEP systems.

In the past, however, this was all very complex and time consuming. Each object that was represented in the model had to be built three-dimensionally “from scratch” by the modeler according to its individual technical specifications. This lengthy, tedious process prevented many design firms from creating the three-dimensionally accurate BIM models that could evolve into the next phase of construction.

But now say hello to my little friend, SysQue for Revit MEP.

With the introduction of SysQue Systems, we have been able to kill two birds with one stone. SysQue gives designers and contractors the needed manufacturer, real world, three-dimensionally accurate components fully modeled and right at their fingertips ready to insert into the Revit model with just a click of the mouse. All of those hours modeling manufacturer-specific content is now a thing of the past. The use of Revit with SysQue by all the vested parties enables everyone working on the project—from designers to contractors—to collaborate and share information on the same platform, significantly decreasing the likelihood of data becoming corrupt or lost in translation.

Now I wish I could say that simply utilizing SysQue solves everything, but disruptive ideas require changes in thinking and behavior. Engineering firms will need to fully accept and embrace the concept that modeling diagrammatically is no longer good enough. In the pursuit of creating faster, cheaper, better buildings, they will need to continually evolve to stay relevant. Part of that evolution is developing more detailed and spatially accurate MEP models that definitively add value to construction. This requires an embrace of a new three-dimensional way of thinking that is very different from the two-dimensional ways of the past.

At PACE Collaborative, we began using SysQue Systems in 2013 to create our MEP models. Since then, our ability to create accurate and highly detailed design models with construction conscious components has improved several fold. For example, we can now drill down into the detail of establishing hanger locations for import into Trimble, extract bills of materials, create spool drawings, and export fabrication files for sheet metal construction. SysQue has tremendously improved our ability to serve our clients.

Tools such as these eliminate the costly effort of re-developing models and allow coordination to take place earlier in the process. 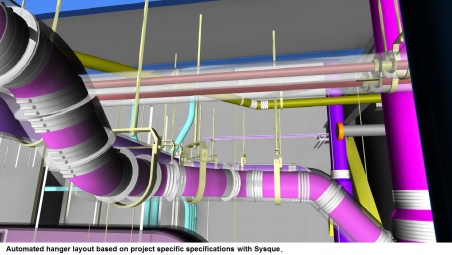 Figure 2: Automated hanger layout based on project-specific specifications with SysQue.

Some may argue that using three-dimensional programs to create two-dimensional contract documents is BIM, but that is hardly scratching the surface. When we embrace a three-dimensional way of thinking, when we utilize tools such as Revit MEP and SysQue to produce spatially and dimensionally accurate MEP design models that continually grow and evolve until a project’s completion, when our models decrease construction costs by allowing conflicts to be resolved and pre-fabrication to occur prior to construction, when we successfully gain in our pursuit for faster, cheaper, better buildings… we can finally say we are designing in BIM.

Ryan Joyce, CM-BIM, has 20+ years of MEP design and construction experience. He began in 1993 doing plumbing and HVAC design and in 2009 began designing telecom. During the same year Ryan started the BIM services department at PACE Collaborative, providing everything from 2D shop drawings to 3D fabrication modeling for contractors. PACE’s ability to combine its MEP engineering and the fabrication level BIM services has developed a unique opportunity for design build teams to reduce cost and time with PACE’s integrated project approach.