Autodesk’s Fusion 360 and Beyond

In September 2015, Autodesk finally brought back Simulation to its 360 platform by adding it directly to Fusion 360. This was not a surprise as the company had, as far back as November 2014, stated that they would do so and offer it for a price increase as Fusion 360 Ultimate. Users that bought in early have felt a bit beguiled as they have paid for something that they did not receive; however, it is back and the company just offered early subscribers another year for free. Fair enough. 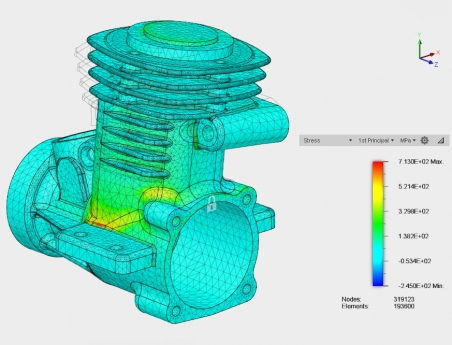 Fusion 360 Ultimate is a collection of CAD-related tools that are completely integrated into the Fusion 360 environment. These include:

Sheet Metal – and that is the last item missing in the Ultimate roadmap. In fact, when you review what Autodesk stated that it would do, while behind a tad bit, they have completed most items on the list. More importantly, Autodesk seems to be trying to complete the list and move forward.

Sometimes companies make statements about exciting plans for their product to be competitive and drive user adoption. When things go awry, they employ the “Don’t ask, Don’t tell” strategy, and simply move on without regard for their prior statements. The Fusion 360 team has impressed me by first being open to their plans, and secondly, actually trying to complete them. For a list of some of those plans, check out D&M’s Fusion 360 Ultimate promotion article.

How does this affect me? Since most readers here will already have Autodesk software of some form, you might wonder how all this benefits you and your team. The reality is this:

Autodesk keeps extending the Fusion 360 Ultimate promotion, which gives users the opportunity to purchase the entire package for only $300 USD annually.

The promotion locks the price permanently.

While Simulation is currently limited to static stress and natural frequencies, the team has been willing to state that they are working to provide transient and non-linear capabilities along with cloud solving.

Now, on to the important stuff, the recent update.

Fusion 360 Ultimate now includes Linear Static and Modal Analyses. Simulation has its own tab, similar to the other components in Fusion 360. The simulation model and results from various studies, regardless of complexity, remain embedded within the single Fusion design file. Much of this technology was present in one of my favorite emerging platforms, SIM 360, which worked alongside Fusion in the past. They are all together again finally, in a single space, and with a complete architecture overhaul. 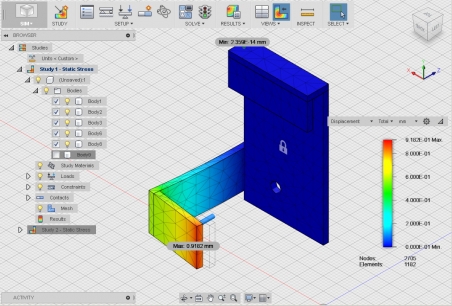 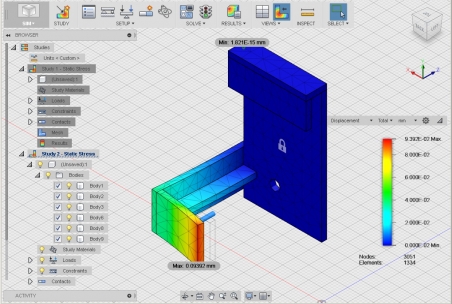 Figures 2a and 2b: Separate studies within Simulation

The integration includes automatic contact generation, which generates contacts based on the model components proximity, as per the default contact option. This is acceptable for now, but I would like to see the system look to the assembly joints and use those to determine appropriate contacts. An example of this would be sliding contact created where there are mating cylinders with a cylindrical joint applied. 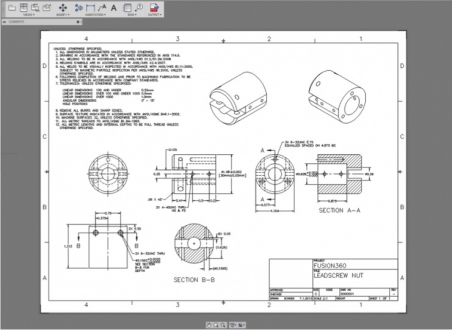 Fusion 360 models are stored in the A360 cloud, Autodesk’s cloud storage and collaboration space. The A360 and Fusion 360 teams have been working together to improve their cloud space and functionality. I think that recent changes are beginning to add value for subscribers, and that certain enhancements in A360 are a wonderful fit for Fusion customers.

Fusion Simulation Results − Simulation results will be visible and interactive for invited team members. Controls are available to review the results of studies for each file version, without needing anything beyond the web shell.

Restricted Invitee Viewing – A360 now offers Read-Write and Read-Only access to data stored on the cloud, which is a critical improvement. Fusion team members can now invite non-team individuals to review the model through the web shell, but not have any access to the actual model.

Real-time multi-user design review − Fusion 360 offers a portal that permits team members and invitees to view the model simultaneously, and chatting and driving the model view as desired. This is a great addition and is available from the web shell or directly within Fusion 360. 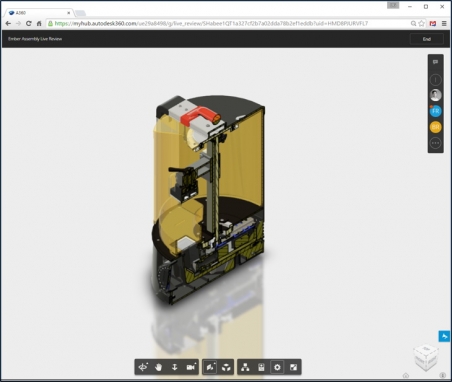 A360 has implemented numerous UI changes, and Autodesk hopes these will make the space data-centric and more usable for teams than in the past.

Following along with the numerous user requests and the Fusion team’s apparent desire to fulfill these, Fusion 360 now employs keyboard shortcuts. Tips and training materials for Simulation are available online, and the team has stated that command searching will be available, but I have not seen this yet.

The Fusion team has not been very reserved about their plans to bring back all of SIM 360’s capabilities and more. Included in their plans are thermal and transient studies as mentioned before, but the company is also trying to bring non-linear solutions to the ‘Fusion’ table for the first time. Add to that the cloud solving capabilities, which as I understand it, are already waiting and planned for the end of 2015. The reality is that the infrastructure needed has already been in place for other services such as Inventor Optimization, Sim 360, Simulation 360, and Simulation Flex.

Will they turn on the Nastran solvers for Fusion 360 Ultimate? I think they should. Why? Because I’m not only a world renowned engineering technology writer, I’m also a customer.

Humor aside, the fact is that Nastran brings with it a significant level of trust and validation. If Autodesk wants to market Fusion 360’s simulation platform as a way to bring validation tools to those who need lower priced (and capable) software, they may very well need a bit more for their customer’s clientele. The Fusion 360 team is likely not too concerned about this though, as Fusion 360 continues to be leveraged as a capable tool for startups, noting that professionals will likely prefer to use Inventor’s features.

The team has also noted that they intend to build on drawing capabilities and simulation as time passes. Branching-merging PDM workflows will hopefully be part of the next major discussion on Fusion’s upgrades as A360’s data management possibilities expand. If I had to name the big ticket items I’d want to see in the next year, these would be on the list:

Fusion 360 improvements continue to impress me. While I need a bit more power and comfort in the design process, the Fusion 360 team continues to bring more value to the design and collaboration table.

To learn more about Fusion 360, check out the Fusion 360 Facebook page.