The first release of AutoCAD was 38 years ago. Back in the days, the focus was on computers itself as a promise of profound impact on the way we do things. Nobody really thought about ergonomics, the goal was to provide functionality first. Therefore, we had rectangular mouse bricks. Another thing is the numpad location. Placed on the right-side it forces you to move hand from mouse to numpad every time you required to enter a number. Probably the original intention was making it easier for the right-handed people to use numpad as a calculator. It was before the mouse became a common input device. As a result, we have unnecessary friction of moving hand between mouse and numpad. The software was also designed to provide functionality first. It was not considered how many letters a person had to type to access a command or how long the mouse path had to be and how many clicks needed to be done. Many moons have passed but we can still see the ergonomics flaws which were planted at the dawn of computer technology.

How the Idea was Born

When I was faced with tight deadlines and pressure at work I collapsed like a house of cards. Then after calming down, I started to think why AutoCAD does not have simple one key shortcuts… Other software packages have them. I have tried aliases and realized that they often require to type 2 or 3 letters which are all over the keyboard and press spacebar at the end. Not only do I have to make around 3 keystrokes, I also need to move my left hand all over the keyboard while my right hand is resting on mouse. On the other hand, when using mouse, I have to dig into menus, aim for icons and then put the mouse pointer back to where it was before. After exploring these options, I became determined to create my own solution which will bring a smoother, better, more enjoyable workflow. It was back in 2014. My goal was to make single key shortcuts which I can put under fingertips of my left hand without the need to run all over the keyboard. And those shortcuts can be anything that can be typed in the command line. Insert a certain block you frequently use? No problem! Make the viewport scale 1:50 in one keystroke? Done! Purge all without any prompts? Too easy! You name it and you will have it at your fingertips. This is how the One Key Shortcuts plugin was born. Over the years I have been using it in my drafting work and continuously improving it. At some point even Autodesk recognized the importance of single key shortcuts, and they created a default shortcuts reference named “one-key shortcuts”. In reality, it is an alias reference card and should be called accordingly.

Simple one key shortcuts can dramatically improve productivity while using AutoCAD. You will feel that you are accomplishing much more with less effort, and it is satisfying to see that with just few button presses, you make your computer work hard for you. Typing aliases, digging into menus, moving mouse all over the place creates friction in the workflow which can be eliminated. Saving a few seconds a hundred times does add up which results in saved time, reduced eye strain, less frustration and overall feeling good at the end of the work day. 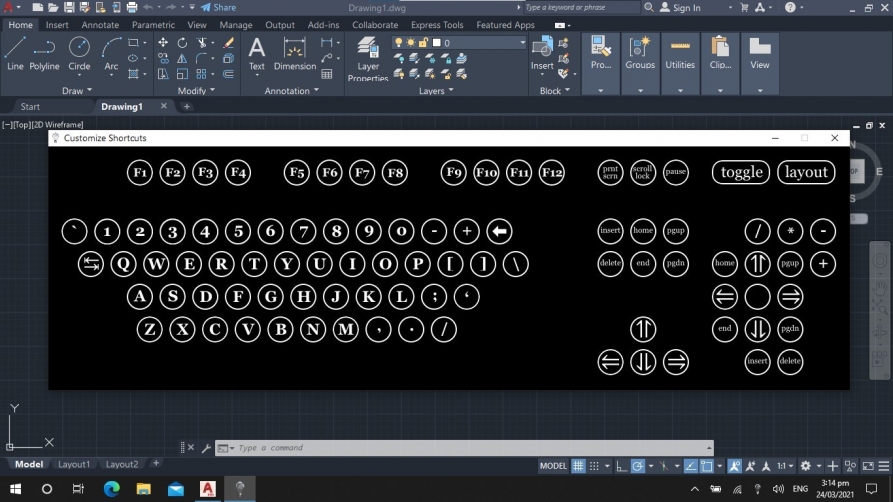 How does it work?

What if I want to type a command instead of shortcut? The solution here is the special keyboard mode for shortcuts. It is similar to having an extra language layout except those unused keys do not change. Once a command is started or when editing text, the keyboard is always in standard mode to allow typing. If you have a certain workflow with most used commands set up it is rarely required to toggle the shortcuts mode. The toggle shortcut consists of 2 key combination such as “shift + caps lock” and can be changed to other options. 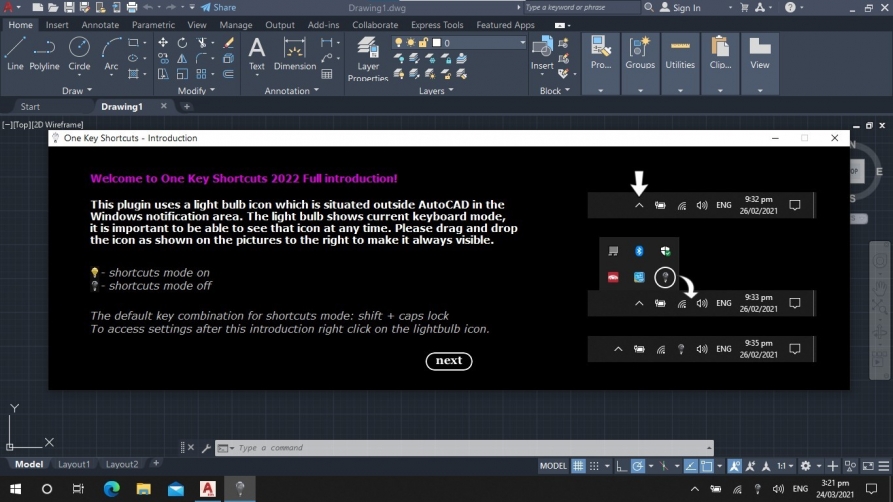 To setup a shortcut simply click on the letter you want to use and type the command to be launched. A command can include prompts which is handy for quick access for commands requiring long chain of prompts. For example, move solid face has this line: “solide{enter}f{enter}m{enter}”. It is 11 keystrokes!

Shortcuts can be persistent which means they do not turn off while typing prompts. It is useful for commands such as snap to middle between 2 points. Typing m2p is not convenient because these keys are all over the keyboard. Accessing this command using mouse requires digging into menus, searching for “mid between 2 points” text which is unnecessary eye fatigue.

It is possible to assign up to 4 commands to a single key. It can be useful for accessing blocks. Press once – insert a chair block, press twice – insert a table block. The command line in this scenario looks like this: “-block{enter}block1{enter}”.

Since you have the freedom of typing anything you want in the command line for a shortcut the possibilities are endless! By the way, no need to worry about having conflicts with default shortcuts. You have the special shortcuts mode layout which is all yours! 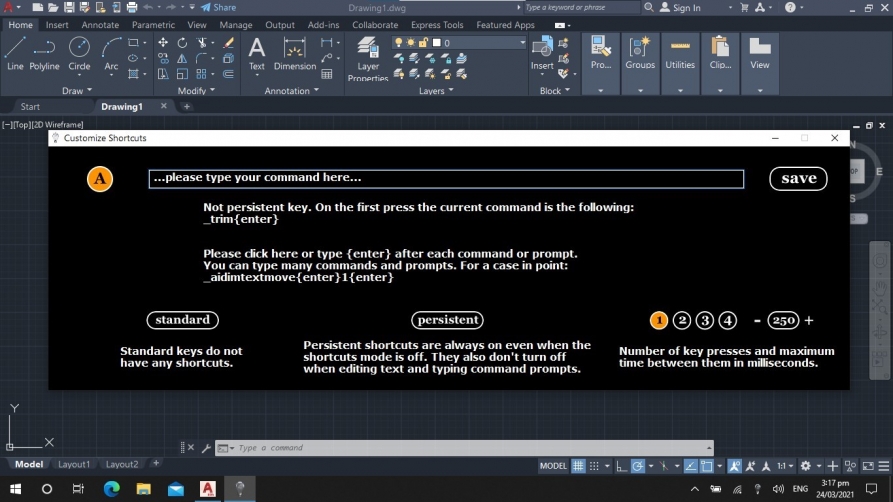 The One Key Shortcuts plugin is available from the Autodesk AutoCAD App Store. If you have any requests or comments, feel free to contact me.