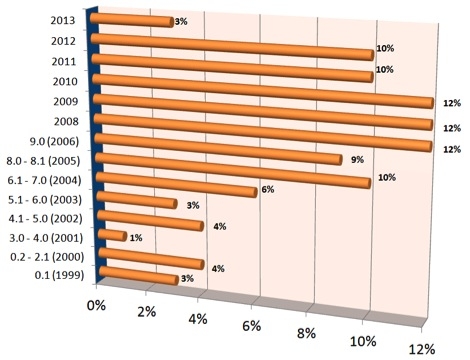 Thank you to the 470 members who took part in this month’s AUGI.com homepage poll!

We asked our Reviteers what release they used first.

Roughly speaking, that means that any given Revit user you meet on our site has about six years of experience with this particular tool. Of course, 22% of AUGI’s Revit users have even more familiarity with it.

That is a whole lot of BIMming going on.

Bill Condon, IT Manager at HuntonBrady Architects, says that his Florida firm began making the switch to Revit back in 2005. He states that it was a necessary adoption in order to remain competitive in their market. There were adjustments that had to be made in his company’s workflow, but leadership and the design team were dedicated to making the move and haven’t looked back.

Be sure to come back next month and take part in the AUGI.com poll on your favorite site feature.

And, you AutoCAD users, chime in on the June poll, when you can reminisce on your first AutoCAD version.

I’d also love to take some suggestions on what you Manufacturing or Media/Entertainment users are just dying to know about your fellow users. Please share your suggested poll topics with me!