I have been reflecting on grading complexity and how my workflows have changed over the years. I remember in the beginning of my career utilizing a digitizer to reproduce contours developed by hand. Then with Land Development Desktop I was able to produce contours by setting parameters and having the software return me contours. Now with the dynamic capabilities of AutoCAD® Civil 3D®, I can quickly test grading alternatives.

After watching “Advanced grading solutions using Civil 3D corridors” by David Zavislan, PE. around 2014, I have wanted to incorporate site grading with corridors into my workflow and expand my understanding of conditional sub-assemblies.

As we all know, trying something new and keeping the lights on are often at odds. My growth had been slow at best. Then comes along “Site Grading with Corridors in AutoCAD Civil 3D 2018: Everything has changed!” by Brian Levendowski, PE, in 2017. This video and the workflow that he laid out has been the metric to which I have been evaluating my own work. But there are other great videos worth viewing or blogs to read on the topic. I would suggest viewing the 2018 AU class “Caffeinated Grading” by David Garrigues, Tim Yarris, John Armendariz.

There are plenty of videos and articles that discuss the tools used to model surfaces with corridors, but few that lay out a practical process or workflow. I do not utilize a single corridor model to create an entire site as discussed in Mr. Levendowski’s video or fully capitalize on conditional sub-assemblies as discussed in Mr. Zavislan’s video. I currently do not have a need for material depths or find myself needing complex assemblies. I do, however, use corridors to replace some of the grading objects that would break in the past, and I have tried to implement some of the key concepts that I took away from Mr. Levendowski’s videos and those of others.

Take the Time to Plan

I think maybe one of the most important and overlooked aspects of grading in any software is planning. Depending on your experience and /or company structure, you may not be involved in design or placement of BMPs, drainage structures, or road alignments. In any case your project manager should have a project kickoff meeting to discuss project scope, budget, schedule, team roles, and so on. It is imperative that you take the time to review the project with the person tasked with this design. Identify your POIs, discuss concept stormwater management, discuss how to balance the site or if balancing should even be a constraint, identify site constraints (handicap spaces, environmentally sensitive areas, access grades, etc.), and don’t be afraid to quickly sketch (by hand) some grading alternatives if needed.

The point is to visualize the site and identify the components needed to construct this final surface before beginning to model in Civil 3D. Know where you want to end before you begin and try to build the surface in a way that will allow you to pivot during design. 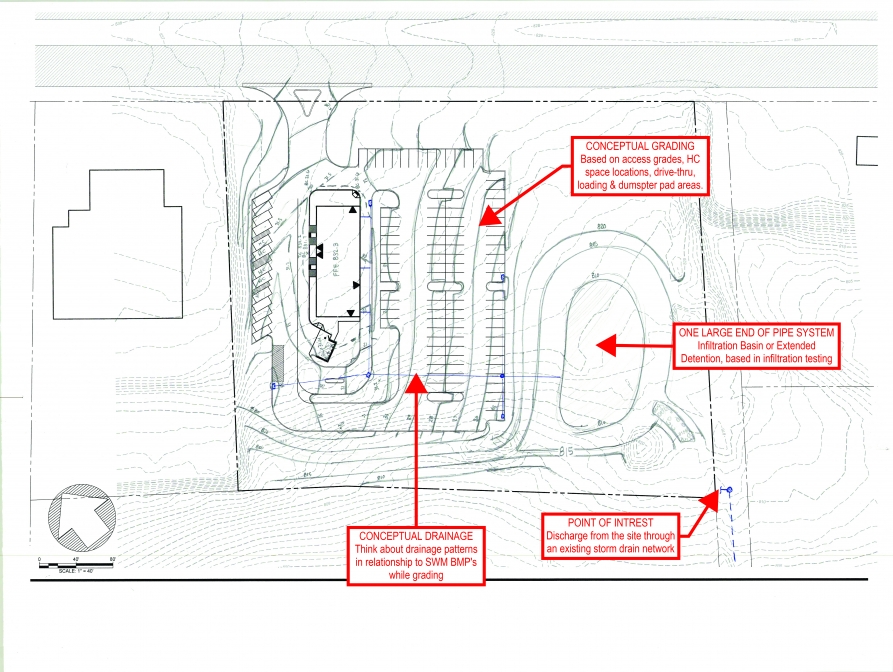 My final surface will always be a composite of subcomponents. I work in land development and as such, through client review, regulatory review, public comment, and all other stakeholder input, sites will go through change during the permitting process and even into construction.

Because of this I have begun building my finished surface as a container surface and pasting subcomponent surfaces into it by layering smaller grading components on top of each other, which allows for a more plug-and-play concept of surface creation.

For example, an extended detention basin would be composed of an overall basin surface, emergency spillway surface, stilling basin surface, outlet structure surface, basin inlet surfaces, possibly a permanent pool surface, and any other subcomponent required by the design. I will build the overall basin shape as one surface and the subcomponents as another, by building each component separately I am able to quickly add, remove, and adjust as needed. Since design is an iterative process, the more agile that we can make our surfaces the better. Additionally, this allows me to data reference just the overall shape to my erosion and sediment control working file to use as my sediment basin or be able to build phase surfaces quickly.

Build from the Base

Drainage, planar, base, or mass surface. Call it what you will, this is the surface on which all others are built. I personally like to call this my mass grading surface because thinking of this as mass grading helps to remind me that this surface is the most simplistic representation of the site (what is needed to bring this site to pad elevation and general slopes to low points).

I build this surface as simply as possible and from feature lines only. This is the surface that I will use in the future to revise my design, so I don’t want much complexity in its construction. I want to be able to easily pivot as the design changes. For example, the final stormwater design might require an additional low point to accommodate an inlet. The thought is that I should be able to edit the existing feature lines or add a feature line to represent this low point and all the other surfaces will update per this revision.  Additionally, creating this mass surface allows me to quickly check cut/fill to see if my conceptual estimates were correct. 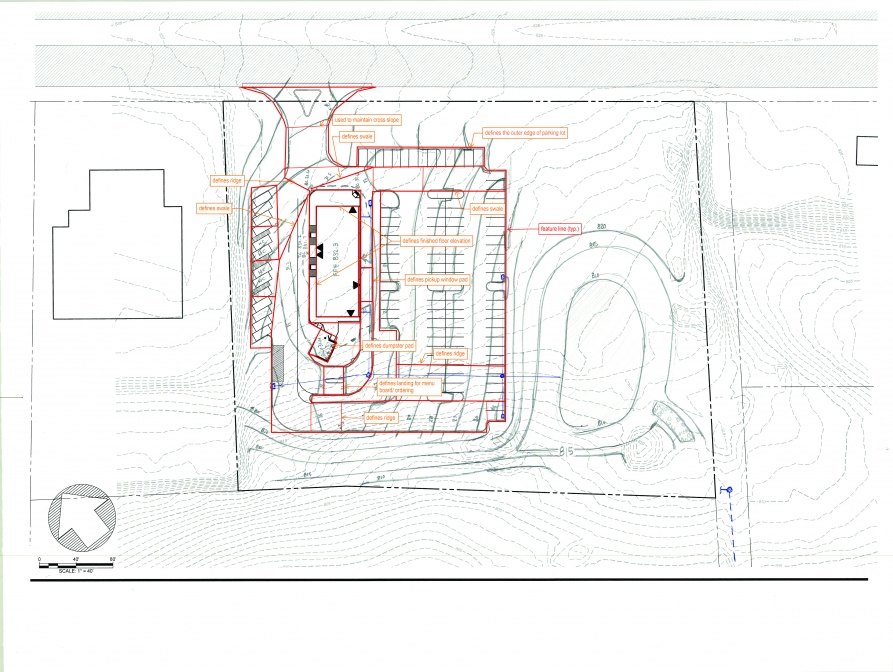 The Importance of Layer Control

Pitfalls and How to Avoid Them

If you have pasted surfaces together in the paste, you like me have ran into this error message “ERROR PERFORMING EDIT.” A quick Google search will land you on an Autodesk Knowledge Network article describing the issue and possible solutions. In this context the main cause is that the boundary of the pasting surface conflicts with the destination surface control break lines. Key to avoiding this issue is simple—be mindful of your boundaries to not let them overlap.

Targeting can become an issue with this workflow regarding circular references. For example, you target a surface or paste a surface into another that is dependent on the subcomponent that you are building from. Generally, this can be avoided through planning your surface structure as mentioned earlier in this article. I also often build targeting surfaces with the same naming convention as the layer control, as follows:

Surface hierarchy is self-explanatory and the key to solving this issue is simply planning. If you plan your surface construction ahead of time and keep you naming convention simple and consistent you should not find yourself with an issue. Also worth noting, I have yet to find a limitation on the number of surfaces that you can paste together, so don’t be afraid to break a surface down into as many subcomponents as necessary to keep your grading design agile.

Again, a quick Google search will land you on forums demonstrating the issues with composite surfaces and subcomponents set to rebuild automatically. I keep all my surfaces set to rebuild manually. I find that the software preforms better and I like the level of control it offers.

Instead of summarizing this article here, I want to invite everyone to download a training paper that I prepared with accompanying drawing files. The documents can be found at:

Work through the exercise and email me if you wish to discuss further at augiarticle@gmail.com.

I like watching these videos like the ones mentioned in the beginning of this article, but I often find myself questioning if it is practical. Do I really need to build a corridor model as opposed to using feature lines with or without grading objects? How agile do I need my model to be? I am interested to know if this workflow works for others. Is the process too cumbersome to manage efficiently? What improvements can be made or how can it be expanded? I look forward to hearing from you.

Throughout his 17-year career, Brian Johnson has held roles as an instrument man on a survey crew, CADD Technician, Senior Site Designer and in many aspects of project management, building a diverse work experience that gives him a unique perspective to problem solving. Brian began his career with a land surveying/planning firm located in Westminster, Maryland, building experience associating grading plans and construction documents with real world environments and experiencing many aspects of land development including environmental assessments, surveying, landscaping, civil engineering and project management. He enjoys researching property titles to prepare deed or easement composites, utilizing BMPs or researching alternative BMPs to meet regulatory requirements, interpreting ordinances, and preparing plan sets and exhibit documents that convey information needed to justify the appropriateness and constructability of the design.