Autodesk Navisworks® has quickly become the industry standard for model coordination and clash detection. C.W. Driver has recently completed the BIM coordination of one of its newer projects, the Student Recreation Center Expansion at University of California, Riverside. This article provides a brief overview of that coordination effort and the role of Navisworks in that process.

This project was a two-level, 88,000 square foot addition and remodel to the existing Student Recreation Center at University of California at Riverside. It was a GC Select delivery method and was a steel and concrete structural design with a budget of $35,000,000.

Though full BIM coordination was not undertaken until construction, the design team had been working in 3D as they created the construction documents. This allowed our construction coordination to begin, having first signed a release form, with the 3D design models.

Before coordination began, the models from the design team were sectioned down into three levels using Autodesk Revit: Underground, Level 1, and Level 2, so that coordination for each level could be performed in an organized and methodical fashion.

Figure 2: One of the three sectioned-down levels.

In addition to sectioning down the design team’s models, C.W. Driver’s BIM managers also created 3D project grids, acoustical ceiling grids, and footing zones of influence to further enhance the models and to aid in the accuracy of the upcoming coordination process. 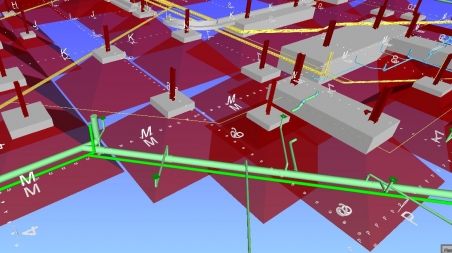 Once these changes and additions had been made, the models were saved out in two formats: 3D dwg—as a reference for Driver’s subcontractors; and nwc—for internal use in Navisworks. These files were then posted to Driver’s cloud-based file exchange site, so as to be available to the entire coordination team. With these model preparations complete, the construction coordination process was able to begin.

BIM coordination formally began with an on-site kick-off meeting. In attendance were Driver’s project team and all participating subcontractors with their respective foremen and BIM detailers or BIM consultants, as was the case for two of the subcontractors on this job. The purpose of this meeting was to assure that all personnel relevant to the coordination process were on the same page regarding established modeling expectations, scheduling, naming conventions, meeting times, deadlines, model coordinates, lines of communication, file transfer methods, and so on.  This meeting also provided an opportunity for the team to meet face to face and bring up any concerns or apprehensions they had regarding the coordination of the project.

After kick-off, the subcontractors had two weeks to create their models and populate them with all the system elements in their respective scopes of work in preparation for the first coordination meeting. Coordination meetings were held remotely on a weekly basis using an online virtual meeting service. A day before each meeting, the subs would update their models on the cloud site. Driver’s BIM manager would then pull down the posted models, bring them into Navisworks Manage, and run a clash detection to identify any clashes that represented legitimate constructability issues that needed to be worked out. A report was then generated in xml using Navisworks’ Report function. The BIM manager then used this xml file to create a spreadsheet that detailed the issues found in the clash detection process. Among other things, this report showed the name of each individual issue identified by the BIM manager along with its location and an image. 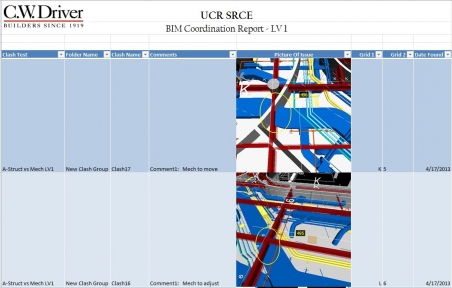 This report was then uploaded to Box along with an nwd version of the clashed model. The coordination team was then expected to download and review the report and model in preparation for the next day’s meeting. The meeting was held online where the team reviewed all the identified issues and assigned appropriate team members to resolve the conflict or write any necessary RFIs.

Upon completion of the meeting, Driver’s BIM manager again created a report documenting the meeting’s assignments and uploaded it to the cloud along with a new nwd. During the week, it was expected that the individual subcontractors would each use their own versions of Navisworks whether it be Manage, Simulate,  or Freedom to, at minimum, review the posted nwd and then make their assigned changes in context of the other trades’ models so as not to create more issues upon solving the items identified that week.

This process continued on a weekly basis until all issues were resolved, whereupon the sign-off process began. Each subcontractor prepared his shop drawings from the coordinated model and then signed them along with a composite drawing and a legal document binding each subcontractor to his respective coordination models. This method of iterative model updates and weekly coordination until sign-off was performed for each of the previously mentioned levels until the entire building was completely coordinated.

From this experience and others like it, it has been found that every step in the coordination process is absolutely necessary to the efficiency and success of a coordination effort. Reliable models, with the addition of construction-relevant clearances and objects, are key to properly identifying real constructability issues. Equally important is the kick-off meeting along with pre- and post-meeting reports so that good communication and accountability is maintained among all the team members. Nor would the entire process be of any efficacy without the sign-off process which binds all subcontractors to constructing their various systems according to their coordinated models. As the execution of this process is continually improved, the BIM coordination effort gets easier, more effective, and produces better results for the entire construction team.

Brenton Wiberg is a BIM manager for C.W. Driver, a large general contractor in Southern California. The firm is highly regarded throughout the design and construction industry for implementation of BIM innovations on each project, and for creating customized software plug-ins to increase the efficiency of the latest software releases.