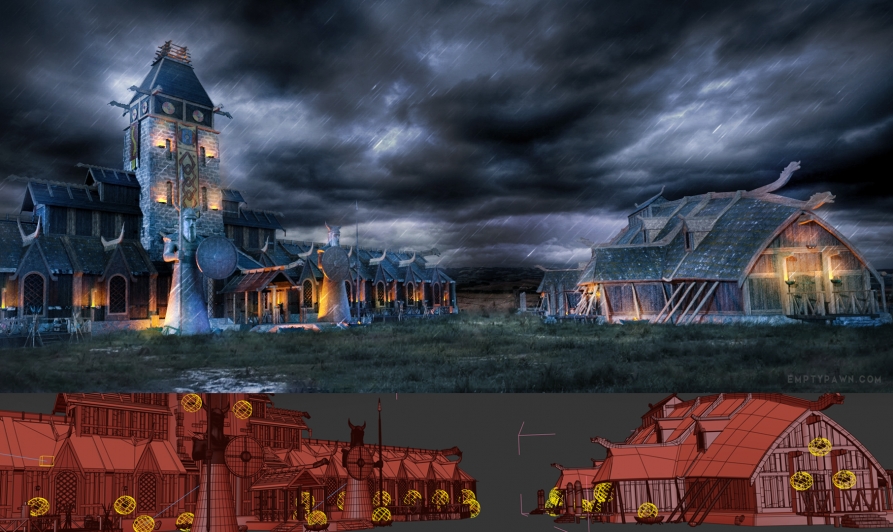 Lighting is arguably the most critical element in 3D. For 3-dimensional content, lighting guides the viewer's eye and provides a tone that invokes emotions relative to the scene. Lighting helps describe shapes, form, and depth. For this reason, it's essential to understand the more advanced features of lighting for the construction of content. I'll discuss some of those in this article.

The Impact of Global Illuminance

Global illumination is a primary component for lighting scenes, consisting of both indirect light and direct light. Generally speaking, direct lighting comes from a source like a light bulb, while Indirect lighting is produced by everything else. Since every object on the planet has a reflection level, light rays bounce off objects, lighting adjacent objects accordingly. So, let's explore how these influence a scene.

For visualization, a sky is generally the light source. It's important to understand that the sky doesn't just influence exterior scenes but also the interior. Light rays cast from the sky bounce around both interior and exterior elements to produce ambient light. This color of the light from the sky sets the tone of an entire scene, influencing the color of objects and shadows themselves. The exposure level of that sky can also influence the scene, making it more or less dramatic. Lastly, the sky light's color can mix with source lights (say a light bulb) for undesirable results.  For example, a standard color scheme used in art, especially in cinematic content, consists of blue skies and gold lights. However, a light from a fire source, such as a candle or fireplace, is orange, and when mixed with a blue and orange environment, can generate light that is peach or magenta. In 3D rendering, this can be less than desirable.  For this reason, it is vital to pay attention to the attenuation (or radius) that your objects and light influence one another. Pay attention to how the color of your sky influences your lights and how your lights impact one another, especially in primary areas of influence like the one displayed in Figure 2.

Finally, the length of the attenuation is essential. The software will generally limit calculations needed to save on rendering time using the length of the influence of light. The longer the length, the more time it takes to calculate.  As you can imagine, this grows exponentially the more lights we have.  The same concept applies to light from distance sources, such as a direct light used to generate shadow. The lower the direct light (mimicking the sun), the longer the shadows; generally speaking, this can mean more calculation time on rendering as the lights influence more objects in a scene.

Projection of Rays for Interior Lighting

A typical exercise in visualization is placing light sources outside windows to project lights into an exterior. Projecting lights this way allows us to cast light in exciting ways to create more dramatic scenes. However, users are often unaware that the types and colors of the lights they use can betray them. The first mistake is not matching the hue of the light from the window to the light source and sky that is casting ambient light around a scene. The clash of colors automatically exposes an issue.  The second mistake is not choosing the proper light source.  Light sources cast shadows differently. Refer to Figure 3, where I display more natural lighting using a good light source on the left of the image on the right, where I used an incorrect light source to expose the problem.

Essentially, the problem lies in the rays of the light source themselves. Light rays appear more parallel the further they are from an object. For light projecting from sun or moon, you would expect the rays to be parallel, which means its shadow should essentially be parallel as well. However, point lights placed near objects don't project parallel rays. The rays diverge 360-degrees from that source, causing shadows from objects it hits to diverge considerably.