This month, we'll share some tips to help users create better content using 3ds Max as a beginner. Topology, UV mapping, and lighting influence everything in creating 3D content, so I'll focus on those.

Topology is the foundation of everything in 3D. There are many ways lousy topology can lead to undesirable results. We'll discuss some of these, hoping to inspire beginners to build a solid understanding and foundation of topology as they begin their journey into the 3D world.

First, let's discuss the base of topology. For 3D models, topology can consist of tris, quads, and n-gons (any object with more than four sides). It's a common misconception that almost everything has to be quads. That is primarily true for characters requiring skin weights and proper deformation (however, triangles are often unavoidable, so strategically placed). On the other hand, hard-surface objects do not need to deform. That means we can collapse edge loops to reduce vertices and polygons (especially on flat surfaces like tabletops and walls).

Avoid n-gons altogether. The software doesn't know how you want n-gons divided and will attempt to divide it in its way. That leads to problems with rendering and game engines and how those faces will display when it divides them. Instead of leaving it to software to guess how to divide it, divide it yourself intentionally. See Figure 1 by Giuseppe Mottola demonstrating optional ways to divide an n-gon. 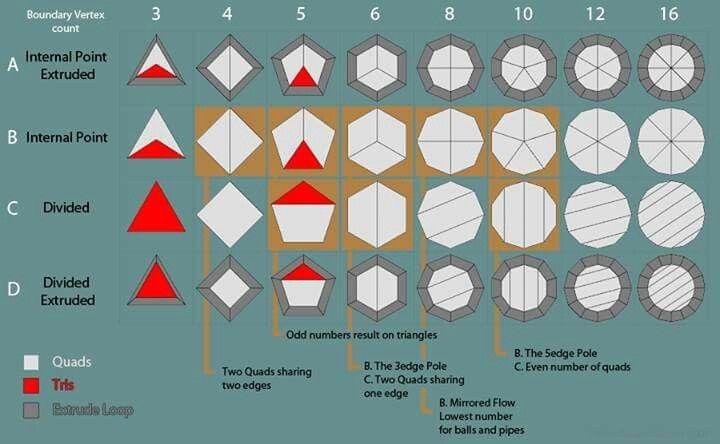 Second, having proper topology allows for faster selection. Every click on an object costs time. As we reduce the number of unnecessary clicks, we can spend more time on more important details. That means we need to consider methods like edge channels and flow. Utilizing proper channel techniques allows us to select, model, and UV map more quickly (along with many other tasks). Coincidently, channels are equally crucial for character animation as they control the deformation quality around essential areas such as mouths and eyes to generate proper expression.

Third, topology impacts baking. Baking is one of the most critical steps in the pipeline, and bad topology can make baking more complicated and lead to errors.

Fourth, poles are many triangles that converge to a single point, which can't be subdivided. That makes them challenging to deal with throughout various activities in the pipeline (they are especially problematic during baking procedures or porting over to software like Zbrush to work on higher resolution details). See Figure 2. 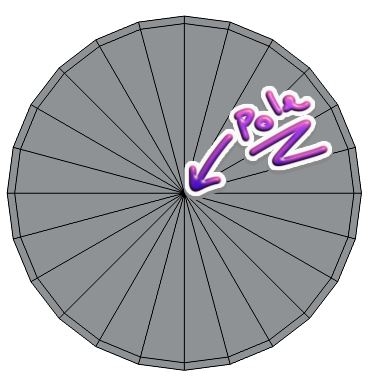 Fifth, topology along edges and curves can produce different gradients in engines and shaders. These gradients influence how objects display. While these aren't necessarily a problem, it's essential to pay attention to them and be aware they exist.

First, objects should have similar texel density, so their materials and textures appear uniform. However, UV shells that aren't seen can be reduced in size, while hero parts can be upsized for higher resolution.

Second, stack similar UV shells. If we have fifty bolts on an object that are the same but aren't that visible unless we are incredibly close to them with a camera, there is no reason to have separate shells.

Lighting is a critical element to the presentation, and taking a few steps can ensure better results.

First, avoid primary lighting from the same direction as the viewer, which flattens objects. You want your lights to produce shadows for depth, making it appear more 3D. See Figure 3, for example. Depth is lost, especially in the leg areas without shading. If you refer to the bot on the right, more depth is produced with shadows making the object appear more 3-Dimensional.

Second, use a reference. Using references keeps us targeted and helps us to aim for a better result. A sunset HDRI lighting a scene will produce a completely different look and result than daytime or overcast images regardless of the textures you use. Slight changes can have dramatic impacts, and without a goal, we can fumble around for hours and end up with poor results. References serve as our goal.

Third, textures and objects can look completely different when worked in 3ds Max then ported over to software like Substance or Unreal Engine. It's important to check early and often how objects look in their final environment while working on it. If you intend to render in 3ds Max, select your environment lighting early and lock it in place. That will help you texture and apply materials that fit your scene more appropriately. If you intend to build your content in 3ds Max and send it to software like Unreal Engine or Unity, work on the lighting in the engine early and port over content as soon as possible to review the progress.