There is a mountain of information online covering modeling, texturing, rendering, and lighting related to work with 3ds Max. Still, there are many steps between those and what is published and produced for media. They aren't as flashy or alluring as the perfectly lit scene and rendered still frame, but some of these processes play an exceedingly important role while receiving a tiny spotlight. So for this month, we'll focus on a few.

There's a significant difference between camera work I've seen produced for AEC visualization in the last decade or two versus content produced for other work in 3D. I want to fracture that if I can.

In the realm of AEC, camera work related to renderings follows what I would describe as a more historical or traditional approach. It focuses on composition with slow linear-speed movement. Movements like dolly toward objects, truck from left to right, a pan across the view, or a vertical boom. These simple actions provide repeatable results but are incredibly dull and do nothing to separate the content from all the others repeating the same movements. If we want our content to stand out, we need to push the boundary and strive for more.

That can include any number of elements, but the most potent camera movements involve manipulating the lens, focus, and speed of the camera's movement while integrating dynamic transitions between scenes. See Figure 1, for example.

In that scenario, a camera would start near the object with a narrow lens, burst back quickly for a short distance, then slowly travel backward and adjust the lens for a wider area, exposing the viewer to more of the scene in focus. This shot is compelling and often used in sports and entertainment. In Figure 2, The camera would begin with a wide lens further back and dolly or zoom in quickly to match the screen's view, which would transition to a new scene.

That is essentially a match cut, giving the viewer the impression they moved dynamically from one scene to another through the portal of that screen. Those types of shots are rarely used in the AEC but adding more dynamic camera work will be sure to make it stand out.

Cryptomattes can be rendered through 3ds Max Arnold and render engines like Vray. Generally speaking, they are rendered images where objects are separated into colored shapes. This allows us to import that cryptomatte sequence into After FX using the cryptomatte effect to mask out and layer additional content (holograms, interactive content, video overlay, etc) or simplify for compositing in Photoshop. See Figure 3, for example.

Here are the steps to render out cryptomattes like the one displayed in Figure 3. First, add the cryptomatte node to the material slate editor. Second, drag that node onto the AOV Shaders in the AOV tab located on the Render Setup window. Third, open the Arbitrary Output Variables window and add drag the cryptomatte in. You'll see you have the option for the cryptomatte to divide the image using a specific asset, object, or material. Fourth and final step is to render and select the cryptomatte display. The mattes can be rendered like any other sequence and used for compositing.

For this article's sake, Keying must work with a green screen. This is another crucial process with media production I see architectural visualization professionals can implement more. With today's technology, there's no longer a need to hire expensive studios to integrate content or actors into visualization. That allows average users the power to boost their media considerably. Moreso when the power of Keying is implemented on multiple levels.

See Figure 4, for example. The lower image with the keyed-in person adds a lot of life and opportunity for connection. In addition to compositing and video production, AEC professionals can use this same technology to produce interactive content for everything from websites to electronic popup displays and kiosks. 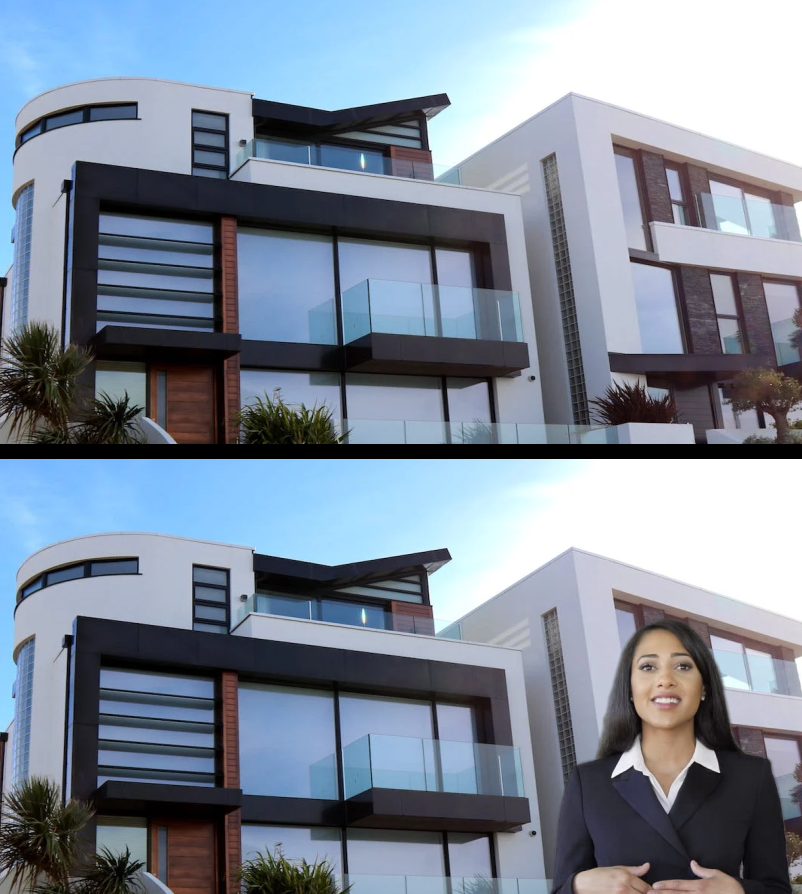