Author: Murray Clack is the CAD Systems Coordinator for CBCL Limited, a consulting engineering firm operating in Halifax, Nova Scotia, Canada. He has been using Autodesk-related products for 26 years. Murray has had articles published in Autodesk’s ‘a’ magazine, submitted tips and routines to Cadalyst magazine’s “Hot Tip Harry,” and recently provided consultation to Autograph Technical Services for the metric version of the CADCard.

I Work for Tips!

Like most AutoCAD® users, I strive to improve my skillset so I can use the software more efficiently, increase my productivity, and reduce the number of headaches while working in a high-octane office environment.

You can have all the theoretical training in the world, but sometimes it’s not enough to get you through the day when faced with unforeseen issues during a deadline. We’re always looking for that particular edge, an edge that reduces lost time performing mundane tasks over and over again, or when trouble-shooting a problem that seems unfixable.

For me, that edge has always been absorbing as many tips and tricks as possible. Whenever I learn a new trick, I feel compelled to share it with the other CAD users in my office so maybe they can get through the day a little easier.

So, without further ado, I hope you enjoy the following…

Draw Sloping Lines Based on a Percentage

I’ve been doing municipal drafting for nearly 30 years, and when doing a detail for a typical road cross-section, we draw and label the crown of a roadway as a percentage (e.g., “2.0% Slope -->”).

A road section will traditionally have a 2.0% slope, and trying to figure out the angle mathematically can be time consuming. I’ve seen coworkers with reference charts or sticky notes at their CAD stations, but you lose time when you have to stop what you are doing and refer to your chart. Also, you may have to draw the line at an odd slope not covered in your reference materials.

For me, the easiest way to draw a line at a slope is to input a relative coordinate value (i.e., at a length and angle from where you are drawing your line).

To draw a line at 2 percent that represents a typical cross-section sloping away from the center of the road: First, start the LINE command and pick a base point when prompted. Then, when prompted for your next point, enter a relative coordinate value as: @100,-2. This will draw a line from your picked starting point 100 units to the right and ending two units down. If you want to draw the line in the opposite direction, then enter the value as @-100,-2.

This will draw a short line, but you can easily scale or extend the line as needed, or you can simply add extra zeros to your relative coordinate values (e.g., @1000,-20) to have extra linework to play with.

Stretch a Group of Dimensions

When creating designs that required a string of linear dimensions, it’s safe to say they will need to be moved away from the objects being dimensioned in order to make room for additional objects.

However, trying to stretch a group of dims at once can be challenging because other objects will get selected, and then you have to UNDO your stretch attempt and try again.

New to AutoCAD 2016 was a method introduced to stretch a group of linear dimensions by using one of the context menu options.

In Figure 1 you will see a string of linear dimensions that need to be stretched.

To stretch all these dimension objects with as few as three mouse clicks, do the following

While you are at it, check out the other options from that pop-up menu (Figure 5).

If you need to extend or trim a dimension to another object, you would typically use the STRETCH command or you would click on the dimension’s object grips and drag to its new destination.

However, another quick method is to use either the EXTEND or TRIM commands.

And as already mentioned, dimension objects can be TRIMMED as well. The only caveat to this trick is that the origin point of the extension line of the dimension object has to reside in the same plane as the object being extended or trimmed to.

One of the nice features of XREF is that it is treated similar to a block insertion (i.e., AutoCAD only has to think of the Name, Location, Scale, and Rotation of one object). Therefore, drawing performance is increased exponentially.

As you probably know, using the XCLIP command to visually clip away the unwanted parts of an XREF helps improve your computer’s performance.

However, even when using XREFs and clipping them, slow performance will eventually become an issue if several XREFs are loaded (especially if the XREF files are large in file size to begin with).

There is an additional trick to improve the performance of imported XREFs by using the system variable INDEXCTL. This variable is set within a drawing file that’s going to be used as an XREF.

There are four settings for using INDEXCTL:

0    No indexes are created

3    Layer and spatial indexes are created

When an XREF is attached or overlaid into a drawing, AutoCAD needs to use your computer’s resources to display the contents of the XREF—even if the layers are frozen and/or the objects are not visible when an XCLIP was created. Those entities STILL get processed even if not visible because they are still loaded into the current drawing.

If the XREF’d file has the system variable INDEXCTL set to a value of 1, 2, or 3, processing time in your current drawing with the attached XREF will increase, which is to say that if the XREF’s layer is frozen and/or not visible within an XCLIP, then those entities will not be processed into the current drawing until the XREF layer is thawed and/or the XCLIP modified.

If you know a drawing file will be used as an XREF, it is suggested you set INDEXCTL to a value of 3.

When the REVERSE command was introduced in AutoCAD 2013, it was designed to reverse the direction of pline vertices. It also took into consideration varying pline widths when the direction of the varying widths may need to be preserved.

There are times when you may need to break a polyline into separate segments.

Traditionally, you can use the BREAK command to select the polyline, and then snap to two or more vertices to break the polyline apart, thus creating two separate plines with a “gap” between them.

When you count the number of clicks and keystrokes, you’ll discover that can actually take up a lot of time. As far back as AutoCAD 2015, you can delete a polyline segment with as few as three clicks

Here’s what to do:

So now you’re thinking, “Ok… but what if I need to select more than one segment? Surely that must take a LOT of clicks?”

Actually, no. Instead of clicking on one segment at a time, you can do a crossing window over the segments you want deleted.

Here’s what to do:

Of course, if you pick the window in the opposite direction, you will get a selection window, and only the segments that fall inside the window will be eligible for deletion.

In the previous trick, we explained how you can use crossing and selection windows.

You may already be aware about the crossing, window, and fence lasso selection methods where, when prompted to select objects, you can hold down your left mouse button to create a freehand selection method in and around objects.

But let’s say you accidentally started using the wrong selection method (e.g., you started the crossing lasso instead of the window lasso), simply press the spacebar on your keyboard once while you are still in a lasso selection mode, and the selection type will change. And if you press the spacebar again, it will then toggle to a “fence” mode (Figure 11). 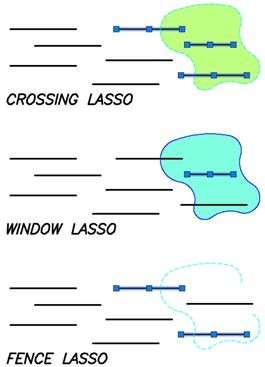